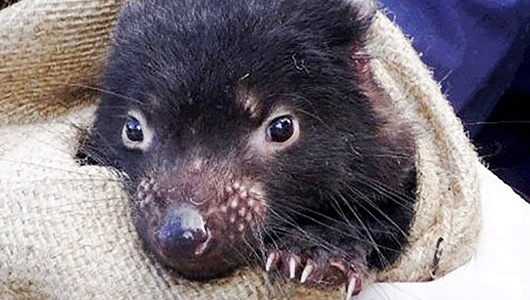 Genes and other genetic variations that appear to be involved in cancerous tumors shrinking in Tasmanian devils have been discovered by Washington State University scientists.

The research is an important first step toward understanding what is causing devil facial tumor disease — a nearly 100 percent fatal and contagious form of cancer — to go away in a small percentage of Tasmanian devils. Indirectly, it could have implications for treating cancer in humans and other mammals as well.

“Some of the genes we think have a role in tumor regression in Tasmanian devils are also shared by humans,” said Mark Margres, a former WSU postdoctoral researcher now at Clemson University. “While still in a very early stage, this research could eventually help in the development of drugs that elicit the tumor regression response in devils, humans and other mammals that don’t have this necessary genetic variation.”

Tasmanian devils have been pushed to the brink of extinction by the rapid spread of devil facial tumor disease, one of only four known forms of transmissible cancer and by far the deadliest. Since it was first documented in 1996, the disease has wiped out an estimated 80 percent of devils in Tasmania, the only place in the world where the animals live.

Margres is part of an international team of researchers studying devil facial tumor disease that is led by Andrew Storfer, an evolutionary geneticist and WSU professor of biology.

For the last decade, Storfer’s team has been investigating how some Tasmanian devil populations are evolving genetic resistance to devil facial tumor disease that could help the species avoid extinction.

A year ago, Storfer’s Australian collaborators, Manuel Ruiz, Rodrigo Hamede and Menna Jones noticed something very unusual while trapping and tagging devils in an isolated region of Tasmania. A very small number of devils that developed facial tumors did not die. Rather, over a period of several months, the tumors went away on their own.

“This was very unusual and we wanted to test for evidence of genomic variation that was causing these devils to spontaneously get better” Storfer said.

The researchers sequenced the genomes of seven of the Tasmanian devils that underwent tumor regression and three that did not.

They found the devils that lost their tumors had three highly differentiated genomic regions containing multiple genes that are known to be related to immune response and cancer risk in humans and other mammals.

The results of Margres and Storfer’s work were published last month in the journal Genome Biology and Evolution. The researchers said the next step in the research is to analyze the tumor genome to see if there are specific mechanisms or mutations there that lead to tumor shrinkage.

Tumor regression is not a phenomenon exclusive to Tasmanian devils. While extremely rare, it has been documented in human cancers.

One such cancer is Merkel Cell Carcinoma, a rare type of skin cancer that often appears on the face, head or neck.

Doctors observed spontaneous tumor regression in a Merkel Cell Carcinoma patient for the first time in 1986 and it has occurred at least 22 times since. However, researchers remain unsure of what causes the tumors to go away on their own.

Storfer and Margres hope is that developing a better understanding of the genetic basis of tumor regression in Tasmanian devils may eventually enable the identification of general mechanisms underlying tumor regression in Merkel Cell Carcinoma and other human cancers.

Top photo: Tasmanian devils are the largest carnivorous marsupials in the world.