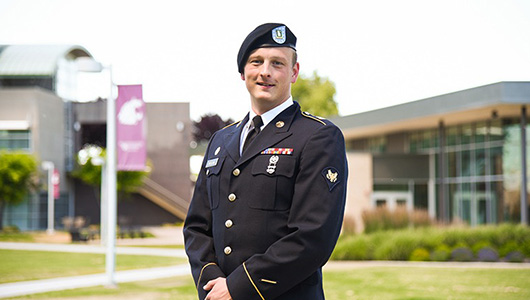 But as his enlisted contract came to a close, he decided to leave active duty to pursue college full-time because he knew an education would provide him with not only the background and know-how to succeed in a future job but  also greater career advancement options.

Finding and attending Washington State University Tri-Cities, he said, has allowed him to continue pursuing a rewarding military career part time through the National Guard while studying at a top research university on a small campus.

“I wanted to go to a good school in a small, tight-knit community because that is truly the type of school environment where I thrive,” he said. “I decided to visit WSU Tri-Cities and thought, ‘this would be great.’”

Combining military background with college for a bright future

Nolan joined the U.S. Army right out of high school in 2011 and, from there, served for two years in Germany and an additional two years at Fort Drum in upstate New York. During his service with the military police, he had opportunities to serve as a patrolling officer, investigate traffic accidents, provide ceremonial support for the military community, and to serve as personal security for high-ranking individuals.

After his contract ended, he attended a community college in western Washington, planning to specialize in nursing. After a few semesters, he felt that career route wasn’t for him. Relying on his former experience in law enforcement in the armed services, he realized he had a passion for that area of public service. Upon examining options for state schools in Washington and doing a couple of ride-a-longs with civilian officers, he decided to transfer to pursue a degree in social sciences from WSU Tri-Cities.

“I was friends with individuals who had become police officers and I did a couple of ride-alongs, and it made me realize why I didn’t want to do a full career switch from policing to nursing, since I had really enjoyed law enforcement.” he said. “I chose WSU Tri-Cities because of the professionalism I experienced with their admissions office and they offered everything I wanted, including a degree I could directly apply to my future career.”

Nolan said the small campus and class sizes were attractive because they would allow him to better connect with professors and become really invested in his classes. Plus, his degree in social sciences would provide him with the knowledge and skills suited for law enforcement.

“I grew up in a small town in Montana, so I was looking for an environment similar to that,” he said. “I thrive in a small school setting. And with social sciences—between the emphases in sociology, English and psychology—it is a good degree program that gives you a good idea of how to work with people, developing a better understanding to the sensitivity of other people, and I could really hone my skills for working in a professional environment.”

Using his education for a future in law enforcement

Nolan plans to continue his military service. Currently, he works part time with the Washington Army National Guard, providing critical training to new recruits while still taking classes full time. After graduation, he plans to either pursue a career in civilian law enforcement or continue a career with the National Guard.

His education from WSU Tri-Cities, he said, will serve as a true asset in either endeavor.

“I do believe I will want to eventually go into administration and leadership,” he said. “I enjoy leading a team, contributing in that way. And the things that I’ve learned at WSU Tri-Cities will be beneficial in that area. As an officer, you do a lot of administrative work and function primarily with other people. These are all skills that I’m perfecting, whether it be through English courses, or through sociology and psychology courses, I can use it all in my career.”

Combined with the things he has learned through his education in the social sciences, he feels well prepared for his continued career in the military and law enforcement.

“I’m glad I’m pursuing higher education while I have the opportunity,” he said. “I want to make sure my experience and education combine effectively to provide me with the best outlook possible for my future.”

By Maegan Murray for WSU Tri-Cities.