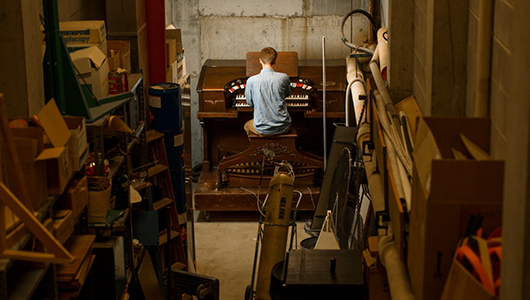 Thomas LeClair, a biology and music double major, is trying to fix a 91-year-old theatre organ languishing in the basement of the Webster Physical Sciences building on the Pullman campus.

LeClair learned about the instrument while thumbing through old files in the WSU Libraries Manuscripts, Archives and Special Collections.

“I was looking up information about the organ I practice on in Bryan Hall and came across a couple of papers about a different and much older organ in Webster,” LeClair said. “I was like, what? That’s the physics building, they don’t have an organ. So, I went to the office in Webster and asked about it and they told me that yes, they do in fact have an old theatre organ in the basement.”

In 1927, early Pullman developer P.W. Struppler purchased the organ that is now in the basement of Webster to accompany silent movies at the soon to be built Cordova Theater.

It was donated to WSU in 1961 and installed in the physical sciences building in 1975 at the behest of then-chairman of physics Edward Donaldson where it was used to demonstrate and study musical acoustics.

LeClair was told to talk to Tom Johnson, a scientific instructional technician for the physics department, about the organ. Johnson had known about the old instrument for years and he and LeClair decided to see if they could fix it.

“We decided to do some electrical testing,” LeClair said. “By identifying and working around a faulty generator, we eventually got the keyboards to power up. The instrument is functional, but hilariously out of tune and needs some work to get it sounding like it originally did.”

LeClair said tuning and refurbishing the organ is both a time consuming and expensive process but his eventual hope is to get it into good enough shape so that he can record a video of himself playing the WSU fight song to help raise money for much needed repairs.

“It’s a really cool organ,” LeClair said. “Because it was originally designed to accompany silent movies, it has all kinds of unusual accessories like crash cymbals, bass drums and a marimba.”

In addition to his musical exploits, LeClair is a student ambassador for the College of Arts and Sciences and an undergraduate researcher in biology professor Wes Dowd’s lab.

He is helping Dowd’s team examine how tiny crustaceans called copepods are adapting to survive in ocean environments that are rapidly evolving as a result of climate change.

“We are putting together an aquarium system to simulate an ocean environment so that we can study how copepods respond to changes in salinity, oxygen and other variables,” LeClair said. “Doing marine biology research and fixing an old theatre organ are not experiences I ever would have fathomed having a few years ago.”

Top image: Le Clair sits at the keyboard of the pipe organ in Webster Hall (photo by WSU Photo Services).