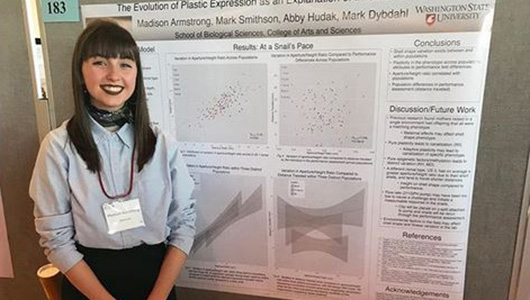 Madison Armstrong, a senior studying evolutionary biology and ecology, has spent much of her time experiencing the world through research and scientific exploration. To say that she has been involved in an abundance of research experiences, would be a massive understatement.

Armstrong started her research experience in Ecuador at age 17, working for “Operation Wallacea,” a conservation company that is based out of the United Kingdom. She met scientists from all over the world that had the same interests and questions that she had. This is where her curiosity and concern for biology started.

“I realized that biology could be more than just a favorite class, a job or an interesting topic,” she explained, “it is critical for the success of the planet,” Armstrong said, who is also a student in the WSU Honors College.

When she first came to WSU in 2015, she continued to fuel her curiosity by joining Mark Dybdahl’s lab and his research on clonal population spread. Armstrong began identifying dispersals of clonal lineages of the aquatic New Zealand mud snail. By identifying favorable environmental conditions of clonal types, she found that human dispersal played a large role in the spread of this invasive species. In her first year at WSU, Armstrong presented at the 2016 WSU Symposium for Undergraduate Research and Creative Activities (SURCA).

Armstrong has also conducted research that focused on phenotypic plasticity of the shell shape in the New Zealand mud snail. She observed that the variation in shell shape occurred across populations of the same clonal type, US1, even though no genetic variation was present.

After about a year of research, Armstrong collected data that supported her hypothesis that plasticity played a role in shell shape, which affected snail movement in a self-made flow system. She was awarded 2nd place for her research poster at SURCA in 2017, and attended the National Society for the Study of Evolution Conference in Portland, Oregon, to present her research poster. She  presented at SURCA again the following year, and this time was awarded 1st place. Armstrong was also recognized for an exceptional research poster at a local Evolutionary Biology Conference of the Pacific Northwest region.

This past summer, Armstrong attended an intensive week-long computational Bioinformatics course hosted by Physalia in Berlin. She was able to work hands-on with data sets provided from scientists from around the world, and represented the U.S. as the only American in the course.

“My research experiences at WSU have enabled me to gain the necessary skills for graduate school and future research opportunities,” Armstrong says. “I constantly strive to inspire others to pursue their interests, which has led to involvement in a large variety of programs.”

Armstrong thanks School of Biological Sciences and the College of Arts and Sciences for providing her with funding to conduct research projects for the past four years, and is extremely grateful to have been given the opportunity to pursue her own research questions as an undergraduate student.

By Hailey Meyer for the School of Biological Sciences