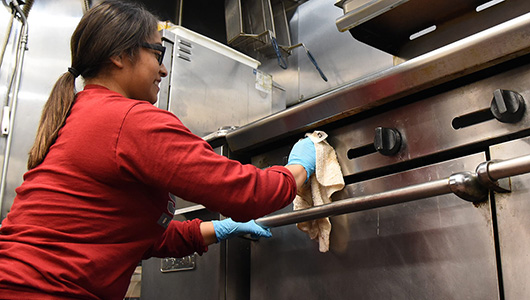 Each semester, Janet Peters, clinical assistant professor of psychology, has her students work with a local service-based organization to provide a real-world experience and “a practical look into how they can use statistics in psychology. They’re also providing a service to a local organization who may not have the time to dig deep into their data and do this type of analysis.”

The students spent the semester analyzing data from the facility. determining factors that influence or relate to homelessness. Tri‑City Union Gospel Mission, in turn, can use the data to demonstrate to donors the need for its services, and educate the community.

The class also spent a day volunteering at the homeless shelter — cleaning bathrooms, organizing the food pantry, scrubbing floors, folding laundry and decorating their sidewalks with sidewalk chalk, among other tasks.

For some students, the opportunity proved deeply personal.

“Having been homeless several times, it was humbling being able to serve and give back to resources that have such a large impact in our community,” said senior student Jacob Hafen. “As we demonstrated with our projects, homelessness isn’t necessarily centered around addiction or a mental disorder, although sure we do see homeless people who are suffering in either of those instances.”

The students aimed to identify a relationship between how long an individual might be homeless and variety of influencing factors, including:

The average amount of days stayed at the facility over the course of three years was just over a month (37 days) – a surprise to many of the students. And the leading cause for longer stays in the shelter was eviction, followed by domestic violence.

Drug use wasn’t as high of a determining of a factor as many of the students initially predicted. In their analyses, they found that a history of addiction was not related to how long the women stayed at the shelter.

Level of education, many said, was also surprising when determining if that had an impact on length of stay. High school graduates typically stayed slightly longer – 43 days, as compared to non‑high school grads, who stayed for an average of 29 days.

While all the information was self‑reported and dependent on the individual’s honesty, it proved to break stereotypes on homelessness for many of the students.

“You would think that because they’re employed, they will get back on their feet much faster, and they don’t,” she said.

Junior Sarah Wright said the project has allowed her and her classmates to better understand the Tri‑Cities community as a whole.

“Homelessness is much closer to home than we realize,” she said. “This could be your brother, your sister, your mother. It doesn’t take much.”

With former experience being homeless, himself, Hafen said often times, there are no easy explanations or answers to the issue of homelessness ― a concept that many of the students said they came to realize.

“Homelessness is really an ugly truth, and it’s good for people to realize that this is part of some peoples’ lives,” Hafen said. “We have the stereotype of ‘this is what homelessness is.’ Giving our time with this project helps debunk that.”

By Meagan Murry for WSU Tri-Cities and WSU Insider