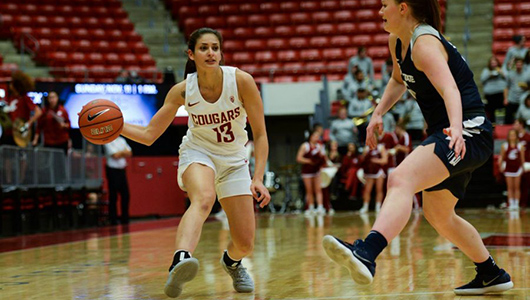 Shir Levy, freshman forward on the WSU women’s basketball team, might not pop off the stat sheet, but her defensive presence has kept her in the starting lineup and earned her “Athlete of the Week” from the Daily Evergreen.

Levy’s international experience, along with her freshman standing, makes her a very intriguing piece for the future of the WSU women’s basketball program.

Levy also competed on Israel’s 3-on-3 team, placing third in the 2015 European Championships. This international experience greatly influenced her decision to play for WSU, Shir told WSU Athletic Communications in a June interview.

“Since I am familiar with European basketball, I looked for a place with international players,” Levy said. “That’s why WSU fits me the best.” She plans on graduating with a degree in psychology.

Levy is a mainstay in the Cougar starting lineup, starting every game so far this season. Despite averaging only 3.4 points, 2.2 rebounds and 1.1 assists per game, Levy is an active defender capable of defending all the way to the three-point line and has been lethal from beyond the arc and from the free-throw, shooting 40.7 percent and 100 percent respectively in limited opportunities.

Top photo: Freshman forward Shir Levy passes the ball to her teammate in the game against Utah State on Nov. 6 in Beasley Coliseum.

By Shawn P. O’Connor for the Daily Evergreen