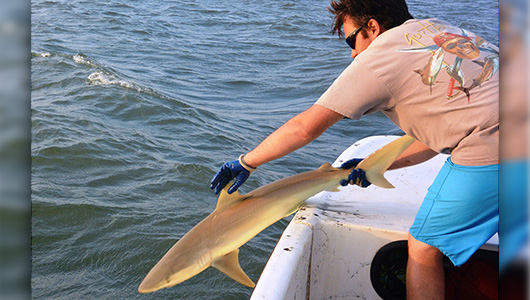 His talk, titled “Where sharks want to be: Using tracking technology to define important habitat,” showcased efforts to conserve and manage sharks and rays, which is difficult because of their wide‑ranging habitats. Many sharks and rays undergo long‑distance seasonal migrations across entire coastlines and even across oceans, but they also show fidelity to specific areas of particular importance such as nurseries, refuges and foraging grounds that are disproportionately important to their survival and population health.

Bangley is a postdoctoral fellow at the Smithsonian Environmental Research Center, where his research focuses on the movement ecology of coastal sharks and rays as part of the Smithsonian Movement of Life Initiative.

He is a specialist in identification of these essential habitats using tracking methods like telemetery, leading to better conservation and management efforts such as fishery regulation and marine protected areas. His work is important for predicting the effects of human‑caused impacts and environmental changes on essential habitats.

He is also a writer for the marine science blog Southern Fried Science. His efforts to increase awareness of shark research in North Carolina have included two appearances on National Geographic’s “Shark Fest.”

Bangley’s talk is supported by the Robert Jonas Lecture Endowment, which was funded in memory of professor Robert “Bob” Jonas, who taught biology and wildlife management at WSU for 25 years, to host speakers on conservation and environmental topics.

This year’s lecture is sponsored by the WSU Zoology Club, School of Biological Sciences and College of Arts & Sciences.