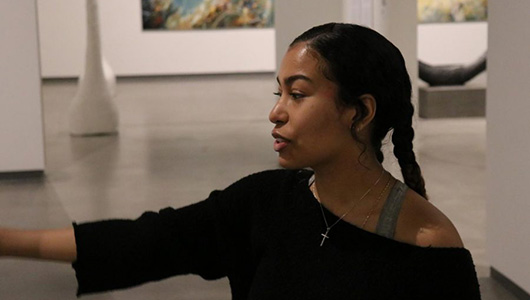 Anthropology senior Sidney Murphy thinks it’s important that people of all ethnicities connect with art and that art can help us celebrate culture.

Murphy, who is also earning a minor in exhibition studies, selected works of four prominent black artists from the collections of Jordan Schnitzer and his family foundation for a special six-week “Social Space” exhibit at WSU’s Jordan Schnitzer Museum of Art.

“Black artists and ethnic artists are the lowest-represented at art museums — and especially black women,” Murphy said. The four featured artists––Mark Bradford, Leonardo Drew, Julie Mehretu and Wangechi Mutu––are getting attention in art and ethnic art communities, but, she continued, black artists as a community do not get the recognition they work for in the art world.

Murphy said Black History Month provided an opportunity to shine a light on their work.

“I don’t think people tend to think of Black History Month with artists,” said Murphy. “There’s a lot of black artists who have been fighting to get their way into art galleries — and we’re finally seeing that happen.”

Each of the works in the gallery shares a message for the viewer. Murphy said Mark Bradford’s works use curling paper, as a reference to hair.

“[There’s] this kind of expectation in the Black community about hairstyles and making it look nice or straightening it, but he’s doing the other side, the curling side,” Murphy said. “Not straightening your hair, [but] making it kinky and making it big and beautiful.”

Murphy said some of the pieces address issues of living conditions in predominantly black neighborhoods: Leonardo Drew’s works incorporate found objects from some communities, to demonstrate burns, pollution and dirtiness in some areas.

She explained the pieces could be intimidating for people who are uncomfortable with art or social critique, but anyone can benefit. Murphy said it can be helpful to stay vulnerable and open.

“You shouldn’t be afraid of the pieces you see,” she said. “This is a social, abstract art exhibit, so a lot of the work is abstract, and it is really hard to pull apart and understand some of the things you’re seeing. Maybe try to make some connections with some personal experience. Come in here and just try to understand.””

Her young nephew’s reaction to works by black artist Kehinde Wiley inspired her.

“He was able to walk into space and feel like [the artist] cared about his identity,” Murphy said, “and they cared about the way he looked, and his curls and his skin.”

The Jordan Schnitzer Museum of Art is located at across from the CUB and the exhibit runs through March 9, 2019.