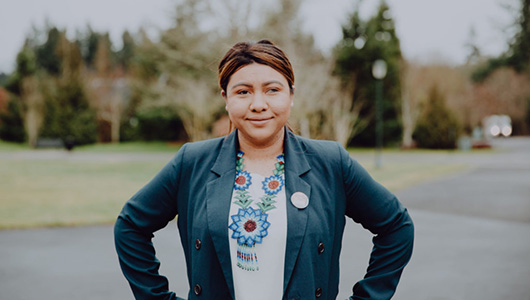 For the average college student juggling school, classes and a job can be a difficult feat in itself. WSU Vancouver, however, is not a campus filled with traditional students. It is a commuter campus and sees everything from parents to long-distance commuters attending classes.

Ana Betancourt is a WSU Vancouver junior majoring in sociology and minoring in history. Off campus, her primary job is photography. On campus, she is the Associated Students of Washington State University Vancouver director of legislative affairs and currently running for ASWSUV vice president. All while being a single mother to her 9-year-old son, Hector. She manages her jobs, child, and education in ways that may seem impossible to others.

“I have amazing parents and I live with my parents because I couldn’t do it without my parents, period,” Betancourt explained. “I also have a sister that is in the nursing program at Clark College.” She described how at the beginning of every semester, she, her parents and her sister sit down to arrange a schedule to ensure Hector’s care for the next few months.

As the director of legislative affairs, Betancourt has an internship stationed in Olympia. When she is in Olympia for her internship from Tuesday through Thursday, her mother takes Hector to school before work and then her sister picks him up once she is finished with her classes. “We’re always making sure we’re set up so were not struggling,” Betancourt said.

“Even though I’m a single mother, I do have a lot of support and they love him just as much as I do. And then my dad acts like [Hector’s] dad — there’s nobody else for him, it’s just my dad,” Betancourt said when detailing her biggest struggle of being a single mom. “Just explaining to him [Hector] that his dad is not with him is the hardest challenge.”

Betancourt’s day starts early; getting herself ready and prepared for the day, then waking up Hector, making their breakfast and helping him get ready for his day. She drives to Hector’s elementary school and then drives herself across town to WSU Vancouver.

Since both Betancourt and her son are students, they both regularly have homework. “It’s really hard because I have to concentrate on my things, then his things. But his things come first,” Betancourt said.

She said Hector has a strict 9 p.m. bedtime. After 9 p.m., Betancourt can begin her own homework. On an average night, Betancourt said she will go to bed at 1 or 2 a.m., with busy nights keeping her up until 3 or 4 a.m.

Betancourt said she feels a lot of pressure in her life. She aspires to go to University of California Los Angeles and earn her Masters in Chicana and Chicano studies, and to eventually become a professor.

“I know what’s going to take me to UCLA is being director of legislative affairs, having a bigger position in student government, being involved in the community, having really good grades and I know all those components are literally impossible being a single mom,” Betancourt said. “So I guess I put that pressure on myself.”

Betancourt said one of the most rewarding moments was when Hector asked her to help him fill out his school council application.“I’m like, ‘you want to be involved with school?’ and he said, ‘Yeah I see you, everywhere you’re involved, and I want to be like you.’”

She said she appreciates the movie nights and other events at WSU Vancouver because they are things she can bring Hector to and they can enjoy together. Betancourt also expressed gratitude to the professors who understand that sometimes children end up in class with their parents, like during the school strikes in September.

Support is vital when it comes to single moms, Betancourt emphasized. She advised people who know single moms to be caring and to validate their feelings. It is a lot for one person to handle.

By Anna Kathryn Nelson for the VanCougar newsmagazine.