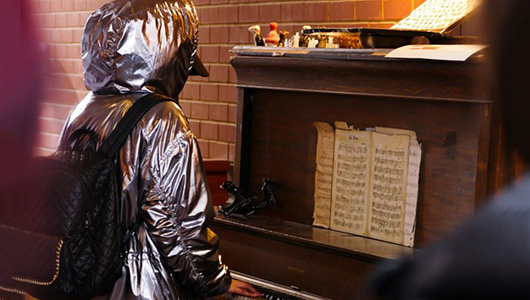 The annual Art for Social Change Competition and Showcase shines a light on local artwork that express the significance of social justice, community building and black history. This year, accepted works were featured in a public exhibition in the Fine Arts Gallery 3 and awards presented by co-sponsoring departments across campus.

Students from all campuses were invited to submit creative work in one of four categories: Remembering MLK, Social Justice in Action, Community‑building at WSU, and Campus Civic Poet.

Journalism major Mariah Inman drew two pictures for the exhibit. “I decided to use colors and charcoal,” she said. “I wanted to use the color because it was a big part of the civil rights movement. It expresses something, like a passion of the movements.”

Inman, an intern for the WSU School of Languages, Cultures, and Race (SLCR), also worked with Lauren Jasmer, SLCR administrative assistant, to coordinate the competition and public art show.

“People were emotional —the art was very, very moving and powerful,” Jasmer said. “My favorite part was just sitting back and watching everyone’s reaction. It was pure excitement and anticipation for the awards.”

Poet Veronica Sandoval won a $500 award from the Department of English. Her poem was called “Canto y Grito, Para Dr. Ricardo Sanchez Post Card for an Altar.” She meant for the poem to represent the Chicanx community.

Looking ahead to the 2020, Jasmer said that SLCR hopes to be able to expand it next year and include more from the Pullman School District and the Pullman community.

Adapted from articles in WSU News and The Daily Evergreen.