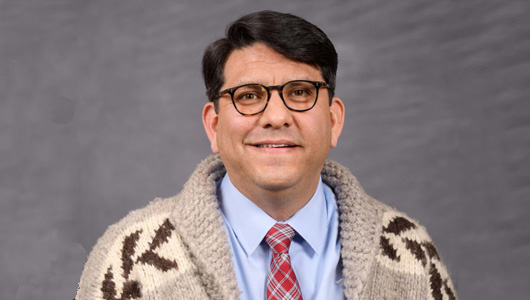 History doctoral student and future professor Ryan W. Booth has received a Fulbright U.S. Student award to spend nine months in India exploring socio‑cultural characteristics attributed to indigenous soldiers during the British Raj up to a century ago.

His work adds an international element to his dissertation, and may well lead to a new global thread of research in the area of military history.

“It’s an incredible honor for me to become a Fulbrighter,” said Booth. “I’m already experiencing that the award will open new doors for me, professionally as well as personally.”

“We are excited that the Fulbright will support Ryan’s work in India, which will help to advance him as a scholar,” said April Seehafer, director of the Distinguished Scholarships Program, part of WSU Undergraduate Education.

Booth is WSU’s 62nd student to receive a Fulbright since 1949, the ninth from the history discipline, and the fifth to study or teach in India; the next-most-recent studied there in 1965.

The title of Booth’s Fulbright project is “Indians to Indians: A Comparison of Imperial Armies of the American West and the British Raj,” as written in his application.

When he arrives in Kolkata in northeast India in August, he will work with a faculty mentor at Jadavpur University. He will scour military and civil documents in the national library and university archives. Then he heads to the national capital New Delhi in the northern middle of the country to examine Raj documents detailing “life on the Indian frontier.” He will look for shifts in descriptions of the indigenous soldiers (such as from “savage” or “wild” to “gallant” or “noble”), which could indicate that they were being assimilated, he said.

For the final five months, Booth will live in India’s far-northeastern state of Assam. He will examine records in the state archives in Guwahati, and live at a Jesuit-school community in Tezpur. There, with help from an interpreter, he will interview several descendants of the British Auxiliary soldiers and gather oral histories.

“I speak a little Hindi now, but I think the interpreter is a necessity since they speak Assamese,” said Booth. Thanks to financial support from the Distinguished Scholarships Program in summer and fall 2018, Booth connected online with WSU Everett student and Indian native Sumit Karn to study the Hindi language and Indian culture.

During his India experience, Booth will visit Karn’s mother in New Delhi; tour the 15th century, west‑coast city of Velha Goa on the Arabian Sea, a UNESCO World Heritage Site; and meditate at Indian activist Mahatma Gandhi’s spiritual home at Sevagram in the middle of the country.

All of the information collected in India will help the historian to identify similarities and differences between those Indian soldiers and American Indian scouts thousands of miles around the globe who served the U.S. Army during the same period.

He is already an expert the second topic, namely Native Americans working as frontier scouts and elite soldiers from the close of the U.S. Civil War into early World War II. In fact, they are the focus of his in‑progress doctoral dissertation, “Crossed Arrows: The U.S. Indian Scouts, 1866-1942.”

Himself a Native American, Booth has long had an interest in indigenous U.S. frontier scouts, and has wondered “who these people were, how they were viewed by the military as well as their own tribes, and why they chose to serve a military and nation that was fundamentally imperialistic in its view and treatment of American indigenous people.”

The questions tie in to something called “martial race theory,” Booth said. Basically, it is a 19th century concept from India in the Raj era that connects race with a propensity for warfare and applied it to recruitment policies for the Indian Army. Booth’s upcoming research in India could evidence parallels between how the U.S. Army came to view its Indian scouts as native leaders positioned to garner resources for their tribes, and how the British viewed its indigenous auxiliary solders.

“Though half a world away from each other at the same time in history, how were both groups of Indians perceived?,” said Booth. “When talking about indigenous people’s roles in colonialism and warfare, some people will answer that they were victims, or that they were traitors to their own people, or did the imperialists reward their loyalty with special privileges and position them as leaders with influence in their communities. I’m aware that my conclusions may draw mixed reactions”.

Historians’ role is often to complicate things, he said. “Sometimes our findings and theories challenge long‑held ‘truths’. In this case, I’ll be looking at imperialism, and untangling its effects on indigenous people, unpacking ideas.”

He might include the comparisons between the “two Indians” as a world-history component in his dissertation. He definitely sees the results as a future research and publication topic.

“Future policymakers, historians, and military leaders may rely on this work to question generalizations about people and our reliance on outdated philosophies of the 19th century which persist to this day.”

Throughout his doctoral program, Booth has received many scholarships and awards—several in 2018 alone, including a National Endowment for the Humanities (NEH) Summer Scholar Award.

In March 2018, he contacted Seehafer about the possibility of a national award. The Fulbright was a good fit, in that it provides funds for American students who study abroad with a faculty mentor on a particular subject. While he embarked on the rigorous, months‑long application process, he established a connection to, and was given a Fulbright letter of recommendation from, military historian Kaushik Roy, the Guru Nanak Chair Professor in the history department at Jadavpur University in Kolkata.

Completed in October, his application was one of nine endorsed this year by WSU and sent to Fulbright for consideration; six of those students were named semi‑finalists, intending to pursue projects around the globe. Booth is the first of that group to receive the award; the five others are awaiting decisions.

A life of opportunities

Booth, 42, is a member of the Upper Skagit Tribe through his mother, Dorraine, who has a home on the Swinomish Indian Reservation on Fidalgo Island in the north Puget Sound. When his father, Doug, was killed logging, his mother moved Booth and his younger sister Carrie Bill, to live with her parents on that reservation.

“My father’s ancestors were white pioneers who came West on the Oregon Trail,” said Booth. “My parents met when they both attended school in Leavenworth.”

His education on the reservation posed some challenges. To tune out bullying, he dug into schoolwork, which ultimately earned him many friends, he said. He also learned to recognize opportunities. In high school, he spent two summer months as a page in the U.S. House of Representatives, serving in the office of then Speaker Thomas Foley.

His interest was piqued when two friends from educated families began to prepare for college. With encouragement from both sets of grandparents, he applied for and was accepted to Gonzaga University in Spokane.

After a year, he joined the Oregon Province Jesuit order of Catholic priests in Portland, and transferred to Loyola University in Chicago, where he earned his bachelor’s degree in history and philosophy. Six years later, he pursued a master’s in history back in the Pacific Northwest at Central Washington University. In 2016 came to WSU for a Ph.D. in history, crediting the Graduate School’s Resident Assistantship for Diverse Scholars as a great incentive, and complimenting WSU for “having so many resources to nurture and guide students…the institutional support is phenomenal.”

Between degrees, he worked in jobs that interested him— as a park ranger in the North Cascades National Park in western Washington; as a history teacher at Heritage University in Toppenish, Wash., Wenatchee Valley College, and the Wenatchee School District; and, as a teaching assistant at WSU.

As a future history professor and researcher, Booth said he looks forward to “contributing to interesting scholarly discussions and figuring out the broader stories and trends, because for every problem that exists today, there is a back‑story from history as to how we got there.”

Considering his future, Booth said, “It’s been a really interesting life so far. And, the moment I learned I’d gotten the Fulbright, it felt like I was about to embark on a different trajectory.” The first stop is Kolkata.

By Beverly Makhani for the WSU Distinguished Scholars program.