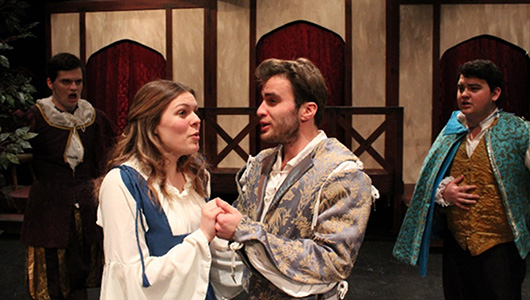 For Mom’s Weekend, graduating seniors Clare Sullivan and Bogdan Theo Mynka shared the stage one last time as Anne and Fenton in Otto Nicolai’s opera, “The Merry Wives of Windsor.” Both will receive bachelor’s of music degrees in vocal performance in May.

During their time at WSU, they have played a variety of roles in the opera and musical theatre program.  Previously, they appeared together in “Young Frankenstein” with Sullivan as Inga and Theo Mynka as Igor, and they starred together again as Cinderella and Jack in Sondheim’s “Into the Woods.”

Last summer, both participated in vocal programs in Europe. Sullivan studied with Si Parla, Si Canta in Urbania, Italy. Theo Mynka participated in the Boston Conservatory Opera Intensive in Valencia, Spain. This summer he will be performing in the Franco American Vocal Academy Opera Program in Austria.

They will both be pursuing Master of Music degrees in performance in the future. Theo Mynka has been accepted to University of Illinois at Urbana‑Champaign with a full assistantship, where he will work in the Lyric Theatre with Nathan and Julie Gunn.

The “Merry Wives of Windsor” production was directed by Julie Anne Wieck, associate professor, and accompanied by the WSU Symphony Orchestra under the direction of Danh Pham, assistant professor, both in the School of Music.