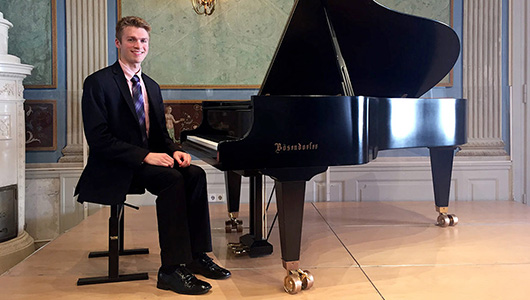 “I’m always happy to perform and share music, but I want to introduce listeners to new ways to process and think about what they are hearing,” Snedeker said. “Thanks to the Fulbright, I will be thoroughly educated to accomplish that goal in a more informed manner throughout my career. I also appreciate the chance to absorb a new and creative environment in the U.K.”

April Seehafer, director of the WSU Distinguished Scholarships Program, said, “The one‑year master’s program at Trinity Laban and time in London present tremendous opportunities for Garrett. He can pursue topics that are important to him, make a lot of progress toward his personal and professional goals, and engage with the musical community in and around London. That’s exactly what Fulbright awards are designed to do.”

When Snedeker returns to America, he plans to seek a second master’s degree in music, teach piano, and perform lecture recitals that allow him to educate others about lesbian-gay-bisexual-transgender-queer-plus (LGBTQ+) issues in the U.S. and the U.K.

The Fulbrighter said, “I want to challenge social norms, introduce provocative ideas, and collaborate with others who are passionate about using music as a cultural tool for social justice and change. My goal is to help create a culture of acceptance and love toward all people.”

Snedeker’s passion for music, awareness, and activism converge in his Fulbright project, “Teaching Western progressive gender narratives through the Beethoven piano sonatas.” That is, exploring sonata form by a well‑recognized classical composer, and identifying its historically-feminine and -masculine characteristics. The topic of gender and music has been popular among scholars for the past half century or so. The novelty of Snedeker’s plan is to take it a step further.

“I want to reveal contemporary social justice initiatives that scholars believe lie inside historically revered music (like Beethoven’s), with the goal to inspire listeners as well as other musicians to take action as advocates for LGBTQ+ people.”

Snedeker said, “Many researchers believe classical music often reveals gender,” said Snedeker. “To a great extent, the social norms of gender inform how we live. I believe that music is shaped by our innermost selves. Since we accept that composers such as Tchaikovsky and Poulenc were gay, and possibly Handel and Schubert, we can ask if their sexuality affected their music. Did their identity impact their art?”

Scholarship on the Thames

With 1,015 students from 60 countries, Trinity Laban’s music program is in the Old Royal Naval College building in the borough of Greenwich. That’s five twists downstream from downtown London on the Thames River, eight minutes east by train from Big Ben, a stone’s throw from the birthplace of Tudor King Henry VIII, and not even a minute from the Royal Observatory, Greenwich, and the world’s Prime Meridian. Famous alumni include composers, conductors, and producers of Hollywood movie scores and Disney World fireworks music.

For his Master of Music degree at Trinity Laban, Snedeker will take classes, attend seminars, give performances, and analyze Beethoven’s sonatas number 5, 31, and 32. He will work with eminent faculty, including feminist musicologist Sophie Fuller. His efforts will inspire a unique one‑hour lecture recital that he will perform in London, back at WSU, and more venues.

He will add to his knowledge and experience as a volunteer for London’s LGBT Consortium and as a piano tutor to low‑income Girls and Boys Club members. He plans visit the homes of English novelist, essayist, publisher, and critic Virginia Woolf and Irish poet, playwright, author, and bon vivant Oscar Wilde; and, the North London Highbury Field, site of the first gay‑rights protest in 1970. He is also looking forward to concerts by the London Gay Symphony Orchestra.

The topic of the Fulbright master’s project aligns with aspects of his WSU experience. Two of note are his 2018 Honors College thesis and his leadership in Allegro, the student association for music advocacy. This organization brings guest artists to campus to perform concerts and host workshops.

His thesis, “Ally training and introduction to feminist musicology,” evolved from his experience living in gender-inclusive housing on the WSU campus. Snedeker presented a unique lecture recital in October 2018. He played three piano pieces by LGBTQ+ composers, preceded by information about current LGBTQ+ issues and terminology.

In advance of the event, he said, “My recital will undoubtedly make certain professors and students uncomfortable. This is the goal: To make people think differently through music.” He has the same hope for his Trinity Laban master’s project.

Music expanded his network. He played cello for eight years in school orchestra, in a string quartet with his best friends, and jazz piano in a jazz band and a combo in high school. As a sophomore, he attended Summer Keyboard Explorations at WSU, his first solo venture beyond his Ellensburg, Wash., hometown.

Snedeker is naturally drawn to music. He remembers he and his younger brother, Thomas, falling asleep as children to the sounds of their parents practicing instruments—their father Jeff playing French horn and their mother Marilyn Wilbanks playing piano. Today, Jeff is a music professor at Central Washington University where Thomas is an award‑winning percussionist and student; Marilyn is a piano teacher at their home.

“We’ve had some pretty amazing extended family concerts,” Snedeker said. Both grandmothers are pianists, and uncles and cousins are musicians. Both grandfathers are retired pastors, but “one, who is 91, is doing catch‑up and recently started learning violin—but he already plays in a recorder group.”

Snedeker, who learned piano at his mother’s knee starting at age 4, currently teaches private piano lessons and is substitute organist at the Pullman Presbyterian Church.

Music near and far

The U.K. won’t be Snedeker’s first international destination. His family has experienced music around the globe. “Hearing the alphorns of Switzerland, historical horns of France, didgeridoos of Australia, and trompa horns of Brazil showed me how music functions in a global context,” said Snedeker.

Traveling by himself, he studied piano at the Classical Music Festival in Eisenstadt, Austria. During his family’s travels to Brazil, Snedeker studied the life and music of the nation’s first female professional pianist, Chiquinha Gonzaga (1847-1935). A divorced woman living in Rio de Janeiro, she bridged social barriers by mixing classical and popular genres. She was also an activist, selling her music door‑to‑door to buy freedom for slaves.

“Her life taught me that music has the power to ignite social change, and can be used to build and empower communities.” Following the Fulbrighter’s May graduation from WSU, the first stop en route to that future: London.

Check out a performance by Garrett Snedeker as part of his senior recital:

By Bev Makhani, Office of Undergraduate Educations, for WSU Insider