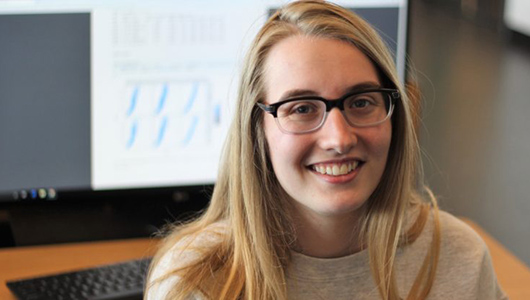 Haylie Murray, a 21-year-old native of Camano Island, Wash., was named as the 2019 Outstanding Senior for the WSU data analytics program.

“There is a sense of accomplishment in being the part of the first graduating class in data analytics,” she said.

Data analysts and scientists are critical to industries on the cutting edge of technology. Data analytics students acquire skills to create, analyze, manage and explore incredibly complex data and communicate past and future trends to solve real-world problems. Graduates in the field are some of the best positioned among their peers to add value immediately when they are hired and see growth in the early days of their career.

Last summer, Murray’s internship with EagleView in Bellevue allowed her to explore a company that provides technology to apply aerial images and machine learning to build predictive models. “I was tasked with the StormAI project where I would utilize a neural network to determine if a building was damaged by a hurricane or wild fire,” Murray said. “The coolest experience was having my model accurately predict outcomes after months of constant work.”

The journey to data analyst

Murray earned her associate degree at Everett Community College, utilizing the 2+2 model that the college and WSU Everett developed to make a bachelor’s degree more affordable to students and to maximize the efficiency and effective of the community college experience.

“My favorite part about attending EvCC and WSU Everett is the students I’ve met, and the amazing faculty and staff here at the Everett campus. It feels welcoming here, and I feel a part of the school. I love the comradery among the different disciplines,” Murray said. That interdisciplinary focus is a hallmark of the Everett campus and includes merged coursework between business, communication and STEM students.

She also benefited from one-on-one support from program faculty and staff, crediting program director Dr. Nella Ludlow for guiding her into the world of data science, and academic coordinator Anna McLeod for helping to keep Murray on track within the program, even with a busy extracurricular life outside of the classroom.

“WSU Everett has provided me a place to make friends with other programs such as the Voiland College’s electrical, mechanical and software engineering, the Murrow College’s communication program and the Carson College business program. Being surrounded by others with different backgrounds helped me be more open to other ideas,” Murray said. “I also had a job in information technology support at WSU Everett, and they helped guide me in understanding some of the hardware behind computers.”

Murray’s senior capstone team developed a data science project for United Airlines. The project required a trip to one of their facilities in San Francisco and concluded with her team presenting directly to executives from the airline at the headquarters in Chicago.

With all of these experiences, Murray was put into a position to challenge herself. “A lot of problem solving comes down to pushing yourself out of your comfort zone and trying new things,” she said. “You cannot be afraid of failing. Sometimes you need to fail in order to succeed. Every failure gets you one step closer to the solution.”

Into a new career

After graduation from WSU Everett in May 2019, she will return to EagleView as a full-time data scientist. “First I will be working with them on creating new models in computer vision and object detection,” she said.

“At WSU Everett I met people in a setting where the program is close-knit. It allowed me to be more personable with my classmates since we had almost every other class with each another.”

The data analytics major is offered jointly by the Department of Mathematics and Statistics in the College of Arts and Sciences and the School of Electrical Engineering and Computer Science in the Voiland College of Engineering and Architecture in WSU Everett, Global Campus, WSU Pullman and WSU Vancouver. Learn more about the program.