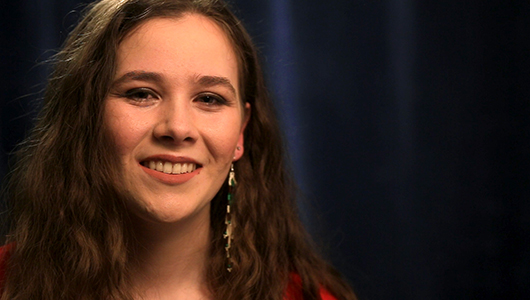 Shana Lombard distinctly remembers sitting on the bleachers as an elementary student at Chief Leschi tribal school and hearing ‘Education is knowledge. Knowledge is power.’

“Those words spoke to me and gave me the notion that education is beneficial for Native Americans, and we should pursue it. Most importantly,” Shana reflects, “no one can take away our knowledge or our education.”

A member of the Cowlitz tribe, Shana attributes her current life aspirations to her time at Chief Leschi, “I learned about my indigenous roots and what it means to be indigenous, specifically Native American.” What does it mean to be indigenous? “We are treated as ‘other,’” she says, “but we don’t see ourselves as ‘other.’”

After receiving her associate’s degree in media communications from Haskell Indian Nations University in Lawrence, Kansas, Shana applied to Washington State University because of the highly regarded reputation communications program, and her desire to return to and work in Washington state.

At WSU, Shana’s passion for her heritage has flourished. “Over the course of earning my degree here at WSU, I’ve learned I have a really big voice and can use it to help Native Americans, especially the Native American student population on our campus. Over 600 students identify as Native American. And you don’t see those 600 students every day. I project that Native identity off every pore of my body. I want to be the shining light that maybe they get excited about.”

Shana studies multimedia journalism at the Murrow College and is seeking a minor in sociology. “There is disconnect between mainstream journalism and the news we see from Native American reporters,” she says. “I can use journalism to improve the images of Native Americans and other minorities in mass media.”

Shana receives numerous scholarships, including the Memorandum of Understanding designated for tribal members out of Washington state. As a Cowlitz, she receives in-state tuition and will become certified in the Tribal Nations Building Leadership program. She is recipient of the Creighton Endowment for Native American Students, established by Jack and Jan Creighton specifically for Native Americans who attend Washington State University.

“I’m grateful to the donors who believe in the importance of Native American education, especially outside of STEM fields. We also need journalists, interior designers, and more. Thank you for supporting Native students across all professions.”

After she earns her degree, Shana hopes to secure a career where she help shape the Native American voice and help tribes work to expand communications channels, and create continuity across social media. She wants to work toward creating unbiased portrayals of the tribal government. Her dream job involves working as a communications director for the Cowlitz Tribe and managing in-house video production at sporting arenas, like Century Link and T-Mobile Park.

Top photo: Shana Lombard uses her passion for her heritage to inspire her fellow students.