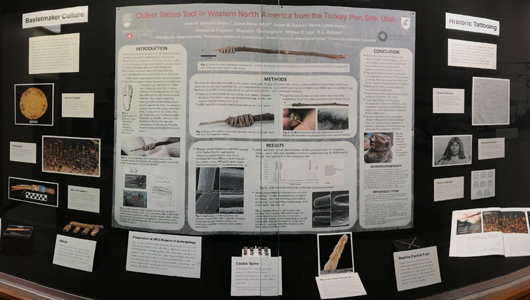 The discovery of the oldest tattooing artifact in western North America earned a WSU PhD student international acclaim from the likes of National Geographic, the Smithsonian, and the New York Times.

Now, faculty, staff, and students will have the opportunity to learn firsthand about the ancient implement and the Ancestral Pueblo people of Southeastern Utah who made it.

Andrew Gillreath-Brown, the anthropology PhD candidate who first identified the tool, created a small exhibit outside the WSU Museum of Anthropology on the Pullman campus explaining the 2,000-year-old cactus spine tattoo tool he chanced upon while taking inventory of archaeological materials that had been sitting in storage for more than 40 years.

The exhibit explains how the tool was identified and gives viewers a rare glimpse into the long history of customs and cultures of Indigenous groups of the southwestern United States.

“Even the smallest artifacts can allow us to extrapolate and help us understand more about people of the past, how different things like tattooing got started,” Gillreath-Brown said. “In many ways, I think they also give us a better understanding of customs and cultural traditions today.”

This fall, Gillreath-Brown plans on using the exhibit to help his Anthropology 101 students start thinking more critically about the conditions that enabled people in the ancient world to practice artforms like tattooing.

“We didn’t really know for sure if people in the American southwest had tattoos 2,000 years ago until this discovery,” he said. “I want my students to ask themselves what was going at the time that enabled them to start doing this and why?

Top photo: The exhibit at the WSU Museum of Anthropology; photo by Andrew Gillreath‑Brown on Twitter.