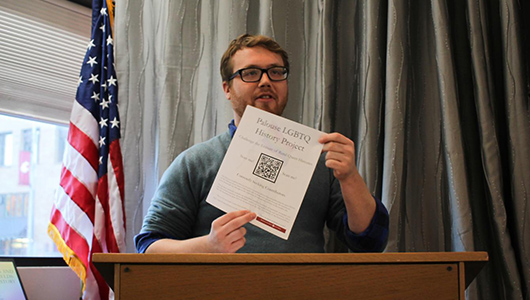 Brian Stack, a Ph.D. candidate in the Department of History, introduced his digital Palouse LGBTQ history project during a guest speaker presentation at Neill Public Library in Pullman.

Stack’s digital exhibit consists of articles, photographs, and other artifacts relating to queer history in the Palouse region from the 1970s to today, and addresses topics that have impacted university members as well as the broader community.

During his research, Stack found more information relating to the topic than he initially thought he would.

“When I was looking for information from The Daily Evergreen, I was expecting to find a dozen articles, but I found hundreds,” he said. “One thing I want to stress is, gay history is not necessarily a story of linear progress. It’s not necessarily everything gets better and better. We often think of history as moving towards a progressive narrative, but not so much with lesbian and gay history.”

During his presentation, Stack discussed a few organizations in the Pacific Northwest and at WSU that have supported the LGBTQ community, such as the Northwest Gay Peoples Alliance (NWGPA) which was established in 1974 by Vicki Rishling. He said this alliance was a result of people who did not think enough was being done for the LGBTQ members.

Stack said another organization to help the beginning of this movement at WSU, was the Gay Awareness Committee (GAC) formed within ASWSU.

However, in 1979, WSU questioned if ASWSU should remove funding for gay awareness and unrecognize them as a club altogether, he said. The issue was later put on the ASWSU ballot and 61 percent voted it should not receive funding.

Stack said later on an organization named Gay, Lesbian, Bisexual and Allies Program (GLBA) opened in the CUB basement and led to what is known today as GIESORC, which was formed in 2006.

Stack said he would love to include more information from earlier eras, but has yet to find materials.

“If you know of people who have more artifacts, I would love to expand the project and display it,” he said.

By Kaitlyn Tejero for The Daily Evergreen