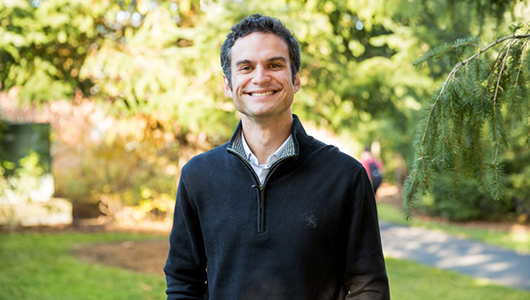 On a chilly, fall Saturday morning, Tom Andersen reached a milestone in his young career with the premiere of his latest film, “It Was Love,” at the Kiggins Theatre in downtown Vancouver.

Andersen, a senior in digital technology and culture at WSU Vancouver, is the owner and director of his own independent film company, Mahilum Films. Having grown up watching old films with his father, Andersen realized early on that he had “a niche for writing” and an imagination.

After the production of his previous film, “Side Effects May Include…Loss of Lives,” Andersen took three years to recover. During that time, he was struck with the inspiration to write “It Was Love.”

“It Was Love” tells the story of Nathan Mayberry, a young man coping with the loss of his girlfriend who mysteriously vanishes without a trace. Mayberry is played by WSU Vancouver alumni, Alec Roselle.

According to Andersen, the inspiration for this story draws upon a fascination with mystery, Andersen’s own experiences in relationships and spreading a message of hope for anyone who has hit a low moment in life.

In the final stages of the project, Andersen explained that he went to the director of the DTC program, Dene Grigar, with his idea. 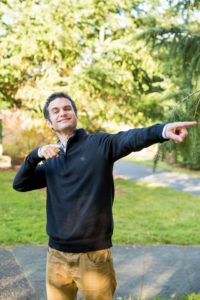 “I had originally thought of showing it to a classroom of students,” Andersen explained, but after presenting Grigar with a finished project, she proposed that they host a showing at Kiggins Theater.

Grigar said, “I watched [Andersen] in my course and I thought he had lots of talent. He has a lot of ambition.”

Andersen said he was excited, but the week leading up to the premiere was “the most stressful one of my life.”

Grigar estimated about 50 people attended the screening “As an event, it was great. It’s nice to be in a movie theatre and not show it on a small screen. There’s something about that experience,” Grigar said.

“I’m so proud of this film,” Andersen explained, “because I’ve taken all my past experiences as a filmmaker and put it all into this. Social media-wise, project-wise. Just everything. I’m very proud of this project because of the techniques that I used, the story that I did, and how much frickin’ effort I put into this.”

Despite a few technical difficulties, the film was well received by the audience. Senior humanities major, Noelle Tadao said, “It was really suspenseful and I like that. It was really well done.”

Lyle Emery, a family friend of Andersen’s who made it to the showing, commented that it has been “nice to see [Andersen] develop his skills over the years. It’s great to see that his hard work has finally paid off.”

Andersen is looking to the future and working on small projects he plans to upload directly to his film company’s YouTube channel and other platforms.

“But as for the larger project, like a sequel to ‘It Was love,’ will take time to create and I am shooting to pitch it to larger companies. The story is already in the works,” Andersen said.

After graduation, Andersen hopes to move to California to pursue his dreams in the film industry.

By Krysten Stewart for the VanCougar Magazine