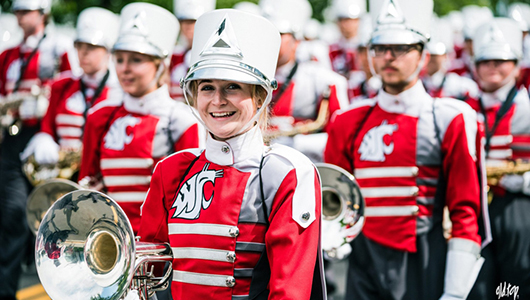 From Devo’s quirky take on the Rolling Stones’ “I Can’t Get No Satisfaction” to Daughtry’s acoustic cover of Lady Gaga’s “Poker Face,” musicians often reimagine popular tunes in their own style. In honor of the WSU Fight Song’s 100th anniversary, the Cougar Marching Band will perform four different arrangements of the beloved tune during the WSU football halftime show on Saturday, Nov. 16, in Martin Stadium.

The WSU Fight Song, written by two Pullman music students, was first published in February 1919 and had its home football debut on Nov. 1, 1919, at the WSC game against the University of Idaho, “so this year’s first home game in November is the perfect opportunity to showcase the song along with the arranging skills of our talented music faculty,” said Troy Bennefield, assistant professor of music and director of athletic bands.

The four versions to be performed on Saturday include the original vocal score, a Dixieland jazz arrangement, a Big Band swing version, and an updated 2019 arrangement for the full band.

Horace Alexander Young, an accomplished international recording artist and associate professor of saxophone and jazz studies at WSU, arranged the Dixieland score for the Cougar Marching Band. Saturday will be the first time it has been performed live for an audience.

The original arrangement (listen to a studio version here) “was written for a seven-piece band, so naturally blowing that up for a 250-piece marching band was a significant challenge,” said Young. “For it to sound like traditional New Orleans jazz, it was critical to incorporate the interplay between trumpet, clarinet, and trombone while maintaining balance among the instruments on the field.”

The Big Band swing-style arrangement by award-winning composer and Regents Professor Greg Yasinitsky premiered in 1982 and was first released as a bonus track on the 2008 CD Kinda Fabulous by the WSU Jazz Big Band.

“It was fun to reimagine the rhythms and harmonies of the Fight Song and translate them to the jazz idiom,” said Yasinitsky, “but sometimes listeners don’t recognize right away that it is the Fight Song.” (Listen to the recording here.)

The Dad’s Weekend halftime show will also be the premiere performance of a refreshed arrangement of the WSU Fight Song for the full marching band by Brent Edwards, coordinator of marching percussion, associate director of athletic bands, and a Cougar alumnus.

“The most important thing is the melody, lyrics, and spell-out remain completely unchanged,” assured Edwards. “I hope listeners notice is that it is no longer a mass of sound, rather it has a bit more content to entertain all tastes. Personally, my favorite addition is the mellophone and saxophone counter melody.”

The students in the Cougar Marching Band (CMB) will get an opportunity to show off their vocal chops during the halftime show, too. Under the tutelage of Dean Luethi, associate professor of music and chair of the School of Music, the CMB students will set their instruments aside to sing the original vocal score in a four-part arrangement by Lori Wiest, professor of music and director of choral activities.

Learn more about the history of the WSU Fight Song and download the sheet music if you want to sing along.

The Cougar Marching Band occupies a special place in the hearts of Cougs everywhere and adds to the spirit of WSU events all year long. Their schedule for home football game weekends is particularly intense. In addition to pregame and halftime performances, there is the Feast of the Arts dinner, the Cougar Prowl at Hollingberry Field House, the RV lot parade, a Cougville set, drum line routines, and often another public venue concert. Tomorrow’s schedule will be posted on the CMB Facebook and Twitter accounts.

In recognition of the CMB and its members’ dedication to tradition and Cougar Pride, the Washington State University Alumni Association is matching $10,000 in gifts to the CMB and its instrument fund.

“The marching band is the largest and most diverse student organizations on campus. If students have at least some band experience and are willing to give their time and talent to represent WSU, we work hard to support them––and our fans­––by providing quality instruments that can weather the outdoor elements of football season and maintain their sound throughout the rest of the year,” said Bennefield.

Support the Cougar Marching Band and keep the music playing.

Top image: Members of the Cougar Marching Band prepare to take the field at Martin Stadium earlier this year. (Photo by David Marksby/Gld.Top)

By Joanna Steward, College of Arts and Sciences, for WSU Insider