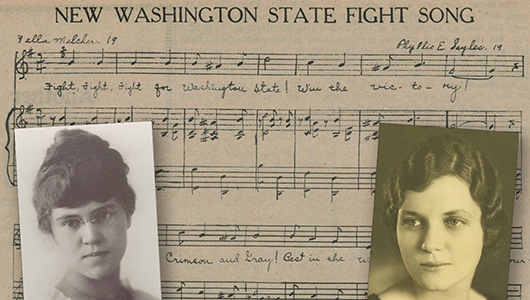 As the patriotic fervor from World War I began to subside, students at then-Washington State College found themselves uninspired by the songs associated with the school. Two senior music students, Zella Melcher of Spokane, Wash., and Phyllis Sayles of Lapwai, Idaho, took on the task of writing new music to energize the student body.

“They debuted their creation to great acclaim on Feb. 20, 1919, at a student body meeting in Bryan Hall, and one century later their Fight Song still inspires WSU students,” said Mark O’English, university archivist.

The Evergreen claimed it “at once scored a hit,” and declared that both the words and music “possessed a swing that might well be described as fully equal if not surpassing any college song written.”

A century later, the “Washington State Fight Song” music and lyrics continue to be sung by alumni, friends, and, of course, students.

Beloved by Cougs and known to many, the song apparently first aired nationally via NBC radio on May 15, 1934, in a live broadcast of a WSC band and glee club performance at the Davenport Ballroom in Spokane. That performance is the oldest existing “Fight Song” recording, as pressed LPs of the performance were later sold on campus.

The tune became widely known when actor John Candy sang the fight song defiantly as “Tom Tuttle from Tacoma” in the 1985 movie Volunteers. A few years earlier—on June 22, 1983—the fight song had reached new heights as it was played to start the day for the crew of the Space Shuttle Challenger, in honor of Cougar astronaut John Fabian ’62, on board for his first space mission.

Back on earth, the familiar spirited strains have also been adopted, and the lyrics adapted, by numerous high school athletic teams across Washington and beyond.

According to O’English, Melcher was active in class leadership, Pi Beta Phi sorority, the Evergreen and Chinook, several musical groups, and more. She was elected May Queen as a senior. Among her many activities, Melcher was a charter member of Mu Phi Epsilon, the campus music honorary.

Fellow MPE member Sayles was a talented pianist who had previously attended Northwestern University, where she compiled a book of that campus’s fight songs and wrote various songs for her sorority.

In their fight song collaboration, Sayles wrote the music and Melcher penned the words. The original sheet music, printed in the February 26, 1919, Evergreen in Melcher’s handwriting, bears a block-printed title of “New Washington State Fight Song.”

Melcher graduated as planned in 1919; Sayles completed her coursework but would not receive her degree for another three years. Both women married in 1922, and Melcher, now McMicken, spent the rest of her life in Chehalis, while Sayles, now Davis, moved to Los Angeles. Both taught music throughout their lives. Zella fell ill while relatively young and died in 1938; Phyllis lived until 1971, passing at the age of 74.

Their legacy and the energetic refrain “fight, fight, fight for Washington State” still rings out across campus.

O’English curated a new exhibit for WSU’s Manuscripts, Archives and Special Collections to celebrate the iconic song as well as the two students who wrote it. “Win the Day for Crimson and Gray: Celebrating a Century of the Fight Song” opened on Thursday, Jan. 17, 2019, and will remain up through the final full week of April.

A PDF of the sheet music is available here.

Adapted from articles by Mark O’English for Washington State Magazine and Nella Letizia of WSU Libraries for WSU Insider.