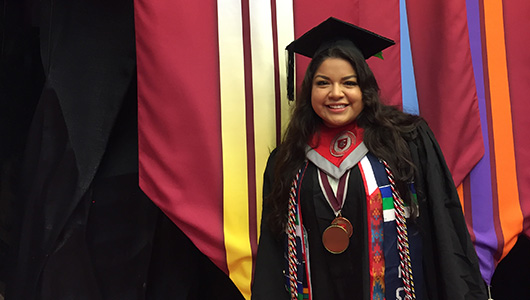 Hilary Zuniga dreams of someday working for the Bill & Melinda Gates Foundation, earning her doctoral degree in international development studies, and enjoying a fulfilling career with the United Nations. This month, the determined 22-year-old took one giant step closer to her goals by graduating from WSU with two bachelor’s degrees and a record of outstanding academic and research achievement, student leadership, and community service.

For her accomplishments as an undergraduate, the college honored Zuniga as its gonfalon bearer in the fall 2019 commencement ceremony at WSU Pullman. Gonfalons are the shield-shaped banners that represent each of WSU’s 11 colleges at graduation events.

“I was truly honored and appreciate the opportunity and recognition,” she said. “I’m the first in my family to get a college degree and I’m an immigrant—not a U.S. citizen—so it was very meaningful.”

Zuniga, who was born in Mexico, earned a bachelor of arts degree in philosophy and a bachelor of science degree in environmental science, with minors in sustainable development and environmental and natural resources economics and management. She was a member of the WSU Honors College and participated in research projects in her two majors.

Before graduating in December with a cumulative grade point average of 3.5, she also studied in London and Ecuador and collected data for an international research effort while abroad.

Outstanding in academics and service
Although studying for two degrees at the same time kept Zuniga plenty busy, she still managed to find time and energy to help many of her fellow students succeed. She served as a peer tutor with the Academic Enrichment Center, specializing in subjects ranging from organismal biology to formal logic, and provided peer mentoring through the Native American Pre-Health Program.

She was academics chair for her sorority, Gamma Alpha Omega, and won the 2019 WSU President’s Leadership Award.

She also served as vice president of the CAS Student Ambassadors, which involved assisting with college events and faculty-led outreach in addition to overseeing a number of funded committees that provide resources to students.

“Hilary is fiercely passionate about cultural, social, political, and environmental issues, but her warm, welcoming smile and positive manner are what draw people to her,” said Arlene Parkay, director of the CAS Ambassadors program. “She is a survivor and a strong, dedicated woman who will make her mark on the world in her own special way.”

‘A positive force’ for a better society
Even outside her major study areas, Zuniga’s academic and interpersonal skills shone brightly.

“She was consistently one of the top students in class projects and one of the best-prepared and engaging students in the class,” said Hiromi Okumura, fine arts instructor. “Not only as an individual but also as a team member, she is a superb performer and able to create great dynamics with her positive attitude and energy. She is extremely bright and compassionate to her classmates and a self-motivated individual, willing to go beyond with an open mind and open heart.

“She also has demonstrated the remarkable ability to connect and engage with the community,” Okumura said. “She is a positive force to create a better society.”

She received numerous scholarships and awards at WSU and was named a McNair Scholar. The Ronald E. McNair Post-Baccalaureate Achievement Program is funded by a federal grant that assists WSU in serving first-generation/low-income students from underrepresented backgrounds to encourage academic achievement and preparation for graduate studies.

Embedded in Zuniga’s future goals is work in environmental and sociological sustainable development in low- and middle-income countries and in shaping public policy in the United States and abroad.

Top image: Zuniga with the college gonfalon at commencement (Photo by J. Steward).