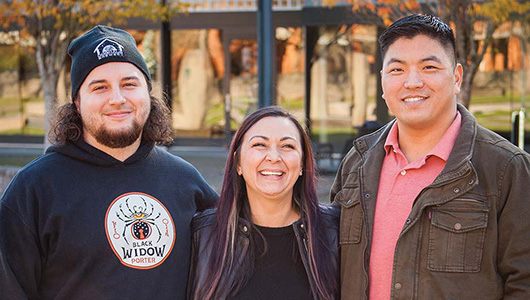 Dimitri has thought about trade school to become an electrician, but first he wanted to get a bachelor’s degree, “because then I’d have more options,” he said.

They started gradually, but once they began taking classes, both Shana and Gareth caught the education bug, and they’ve passed it on to Dimitri.

Shana attended Lower Columbia College, started studying information systems, dropped out and went to work, then quit her job and went back to LCC, where she ultimately completed her A.S. degree in information systems and another in business management. She then completed an A.A. transfer degree in art and started at WSU Vancouver in 2017.

Dimitri was also a student at LCC when Shana told him about the Creative Media and Digital Culture program at WSU Vancouver. Persuaded in part by the program’s high job-placement rate, he set aside his tentative plans for trade school and transferred to the Vancouver campus that same year. He is focusing on video game development and graphic design.

Gareth earned some credits at Western Washington University right out of high school, then enlisted in the Army, serving for four years, including a stint in the Middle East. Military service left him disabled, with ruptured disks and damage to his eyes and lungs. He went on to earn a double bachelor’s degree in health administration and project management at George Fox University, and a bachelor’s degree in nursing at Linfield College. In 2017, he enrolled at WSU Vancouver for his DNP, with an emphasis in psychiatric mental health. He currently works as a staff psychiatric nurse at PeaceHealth in Longview, where the family lives, and looks forward to becoming a nurse practitioner.

“He’s a professional student,” Shana said. “We had a bet he’d go back to get his doctorate, and now we have a bet he’ll go back and teach.” Gareth shook his head, but Shana added, “We’ll see how long he can last.”

Beginning the journey
Early on, Shana was a single mother to Dimitri and her older son, Devin. They moved around, settling in Longview when her kids were in middle school.

Around that time, Shana and Gareth met at a restaurant in Longview, where she was bartending. “I didn’t feel like making food for myself,” Gareth said, “so I went for lunch, and then dinner.” They quickly became inseparable. They have been together for 10 years and married for 7.

Gareth was a single father to a daughter, Rebekah, and a son, Asher. Shana and Gareth now have two children together: Madden and Emmarie. Four children live with them: Dimitri, age 22; Asher, 12; Madden, 8; and Emmarie, 2. Rebekah, 18, is in college; Devin, 25, is the father of their two young grandchildren, Sauvryn and Zaegan. Shana’s brother William, whom they raised from the age of 5, is now 18 and out on his own.

“Food is central to us, but we don’t know how to cook for two,” Gareth said.

Finding the way
As a disabled veteran, Gareth and his immediate family qualify for veterans’ benefits that have been indispensable in enabling them to continue their educations. In fact, among the people at WSU Vancouver who have been most helpful to them, they credit Sarah Holm, formerly the veterans peer coordinator. “For Dimitri and I, Sarah was our rep and really helped us get benefits sorted out. She made an easy, clear path for us to start,” Shana said.

Gareth also credits former veterans coordinator Krista Griffin Walker. “Veterans benefits are hard to figure out,” he said. “When we had trouble with stipends or payouts or bills, she knew what to do.” She is now clinical coordinator for the College of Nursing.

Gareth was accepted at several West Coast colleges for his doctorate. He chose WSU Vancouver because WSU’s College of Nursing has “some of the highest national accolades a nursing college can have,” and because he was impressed with the DNP program director, Anne Mason (who is based in Spokane). He also liked the satellite program that makes it easy to collaborate with students on other campuses. Plus, he added, “the geography is a very good location for us—and my family coming here helped me make the decision.”

Shana is impressed with the extent of the support she has gotten at WSU Vancouver. “All the professors have been extremely helpful,” she said. Gareth mentions how much he values the library and the research help available.

With the end of this phase of their educational journey almost complete, how do they envision celebrating?

“We’ve been talking about taking a trip to San Francisco!” Shana said. “And with the job placement rate (for CMDC) over 90%, I hope to have a job by graduation.”