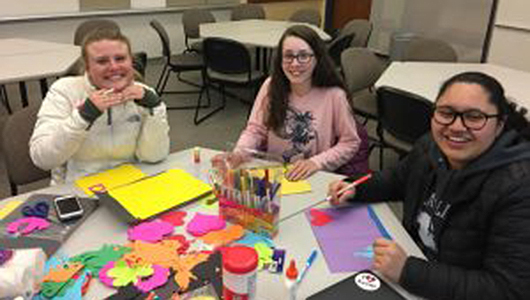 When Amelia VanMeter graduates this spring, she will have completed three majors in the time it takes most students to finish just one.

“The only way I was able to do this was because I really and truly care about what I am doing,” said VanMeter, who made it clear she didn’t let anyone hold her back earning bachelor’s degrees in both psychology and human development, and a second major in Spanish for the Professions.

“Nobody stopped me, so I just kept going,” said VanMeter, who took 18 or more credits each semester.

“I think I’ve encountered the same challenges as a lot of other people,” she said, naming off the challenges college students still face that are now considered normal: balancing finances while juggling classes, homework, and other obligations.

“I did have people say, ‘three majors is a little much, maybe you should slow down,’ but I know what I want, and I know that I can handle this workload.” VanMeter said she never shied away from the scholastic requirements, even when they seemed unsurmountable.

VanMeter worked as a teaching assistant for Psychology 105, a research assistant in the laboratory of Raven Weaver, and a lab manager for the Affective and Cognitive Influences in Decisions (ACID) Lab.

Though VanMeter’s days on the Pullman campus were filled with academic pursuits, she still found time to be involved with Psychology Club, Human Development Club, and serve as the vice president of Yarn Club. “We get together and show off our projects,” said VanMeter of her knitting and crochet hobby.

One of her favorite memories from WSU entailed going to movies at the CUB with her friends. “They let you bring as many snacks as you want,” said VanMeter, lauding the large tote bag full of popcorn and candy that accompanied her to each film. “I saw some really cool movies there that I would not have been able to see otherwise.”

VanMeter’s advice for incoming students is to make sure you’re interested in the subjects you’re studying.

VanMeter currently volunteers with Hospice of Spokane, and said, “I’m really interested in death and dying.” She has an internship set up with the National Alliance on Mental Health of Spokane for the coming summer.

From here, VanMeter will mostly likely pursue graduate school for a psychology degree in counseling. She said that she wants to work on the community side of psychology, primarily with older adults whom she has always found interesting.

“My mom always said I came out of the womb as a 60-year-old woman,” said VanMeter with a laugh. “They know a lot, and I think that we could learn a lot from them.”

Though WSU’s class of 2020 will be going without the traditional on campus graduation ceremony in light of COVID-19, VanMeter said she will give campus a proper farewell when she packs up her Pullman apartment this summer. She plans to get together with friends to celebrate when it’s safe to do so.

VanMeter said, even though times may be uncertain, “I look forward to beginning this new chapter in my life.”