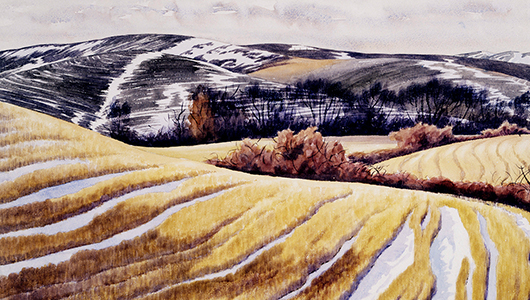 In 1935, Washington State College President Ernest Holland wrote to Charles Duveneck, the brother of American figure and portrait painter Frank Duveneck, who created a portrait of Charles in 1890. Holland had acquired the portrait for his personal collection. “I am fortunate to have been able to purchase the pastel portrait of yourself; and I shall be grateful to have you tell me if you know of some paintings by your brother which I might obtain…at a reasonable price,” wrote Holland.

With such gently persuasive letters, Holland was able to acquire close to 100 artworks that eventually became a founding collection for the future university’s Jordan Schnitzer Museum of Art. In addition, 325 boxes of Holland’s correspondence found their way to WSU’s Manuscripts, Archives and Special Collections (MASC), archived along with Holland’s books for future researchers to find and study.

These artworks, letters and books form the foundation of an online exhibition titled “Follow the Sun: The Holland and Orton Collections.” The exhibition will become a physical installation at the museum when it reopens to the public.

The exhibition is the culmination of a semester-long internship for three WSU students minoring in exhibition studies and working with the museum and Ryan Hardesty, curator of exhibitions and collection. This semester, he based the curriculum of his Museum Procedures course entirely around the exhibition’s research and development. Seniors Eleanor Albrecht, Madison Levesque and Kimberly Lick were tasked with developing exhibition themes, researching artists and artworks, and presenting potential gallery design.

“This project is a wonderful partnership between the WSU Libraries and museum,” Bond said. “The libraries hold key archives that inform the interpretation and provenance of these paintings.”

“The exhibition has been an opportunity to research again and present for a new audience the museum’s founding collections assembled by President Holland during his 30‑year tenure at Washington State College from 1916 to 1945,” Hardesty said. “Contemporary art during Holland’s time, these works demonstrate Holland’s perseverance to acquire paintings of great quality by some of the most significant artists of his day.

“In the end, the old adage ‘we can do more together than apart’ rings true, and I couldn’t be more pleased with the students’ contributions and the experience they received,” he said.

Levesque, who also worked on the Kimble Northwest History Project, focused most of her research on Holland’s art-collecting legacy as well as the historical background of the Great Depression and Works Progress Administration projects that allowed many of the paintings to be made. She worked closely with Bond to go through some of the hundreds of thousands of letters Holland had written, some to art dealers and some to artists themselves.

“When looking at the letters, you can see just how great of a negotiator Holland was, obtaining most paintings for only a fraction of the appraised price,” Levesque said. “Holland worked hard to obtain as many paintings for as little as possible so he was able to present the students of Washington State College with as much artist exposure as possible.”

In Holland’s will, she learned, the president donated his collection of paintings to the school under the condition that one day the collection would be displayed properly in an exhibition setting.

“Starting soon, this dream of his will come true as his own collection will be displayed at the Jordan Schnitzer Museum of Art,” Levesque said. “I hope to be able to return once social distancing is over to see this amazing collection once more.”

According to the museum website, the Holland and Orton Collections contain a fascinating array of artistic themes and approaches, from the romanticism of the Hudson River School to the social concerns of American Realism and American Scene Painting. The largest areas of focus, however, are works of American Impressionism, illustrating a dynamic evolution of influence from Europe to America to the Pacific Northwest. Throughout it all, the landscape endured as a favorite subject, representing ideal beauty as well as westward ambition and migration.

Financial support for the collections came from Regent Charles W. Orton, who contributed funds to support Holland’s ambitious collecting efforts at a time when resources were scarce.

Levesque said the American scene is extremely important within the collection, as a good amount of the paintings depict American life at the time.

“Many of the paintings were created during the Great Depression and commissioned to be created by the WPA to depict other New Deal resolutions, such as Grand Coulee Dam,” she said.

Two other themes of the exhibition researched by Albrecht are making the European landscape the American landscape, as well as Worth D. Griffin and his painting projects.

“The title of this exhibition is ‘Follow the Sun’ with the idea that the spread of impressionist and post-impressionist landscapes went from the east in Europe to the west in America,” Levesque said.

Griffin was a tenured professor in the fine arts department who was commissioned to paint on behalf of the school. He first focused on portraits of pioneers and settlers and soon transitioned to painting portraits of American Indian tribal leaders and members.

“Some of these were a part of the Holland and Orton collections, as they believed these cultures were endangered,” Levesque said. “Over 50 paintings were created of American Indians by Griffin and his students.”

The third student that worked on the exhibition, Kimberly Lick, is experienced with design, so she was put in charge of the design and placement of the paintings.

“She created several different models for us to view each week, which only got better as the semester carried on,” Levesque said. “My favorite part that she designed would be the salon-style wall that will be the highlight of the design. This will be her modern take on what a salon-style wall can be.”