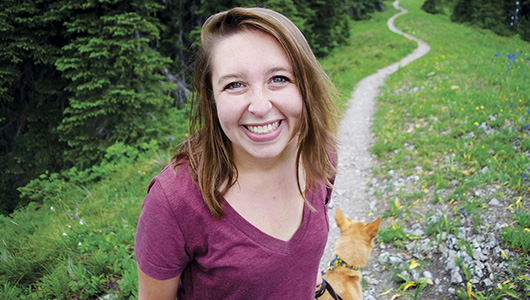 Dogs and humans have been inseparable for many millennia. Dogs eat, sleep, play, and work with us in relationships so intimate that we call them people, family members, and, as novelist Spencer Quinn puts it, members of “a nation within a nation.” Or so it would seem to your typical American dog owner.

In fact, says WSU anthropology graduate student Jaime Chambers, “the ways we interact with dogs are extremely varied” once you start looking at the relationship across cultures.

To look at the dog-human relationship in a global context, Chambers is delving into the “Human Relations Area Files,” a Yale University-based ethnographic database. Searchable by keywords, Chambers is sniffing for patterns across 186 cultures.

So far, she’s uncovered “over 8,000 paragraphs of dog-related content, including myths, examples of dogs being interacted with, dogs in ceremonies.”

Chambers has been curious about the variety of human-dog relationships for years. For Americans, she says, “dogs are companions, child surrogates.” But as a Peace Corps volunteer in Malawi, she saw something different. There, dogs “are shown affection, but there’s more distance, and there’s a greater level of risk, because of rabies.”

From the Area Files, she’s discovered that “play is uncommon, maybe a couple dozen appearances.” But “is it actually uncommon or is play just rarely noted by the ethnographer?”

That’s the big caveat about studying dogs through the lens of human cultures. “Anthropology is the study of people, so in the ethnographies, when dogs are mentioned, it’s almost as an aside. If a dog serves an obvious utilitarian role, if it’s a very visible part of the people’s economy, an anthropologist is more likely to mention it, as in Siberia, for sledding, hunting, and food.”

Although her analysis is just beginning, patterns are emerging. Hunting, not surprisingly, pops up a lot in the data.

“I think scavenging is also very common. Either descriptions of dogs milling about and getting their own food, rather than being provisioned by humans, or humans having to take measures against their dogs taking the humans’ food.”

Another is personhood, “this idea that you don’t have to be a human to be a person.”

Among the Konso of Ethiopia, for example, it is taboo to buy or sell dogs because of their personhood, while a Toraja myth from Sulawesi states that dogs are equal to humans because they descended from a human ancestor.

While filling a gap in scholarship is important, Chambers’s dogged exploration of this ancient relationship is a real treat for the rest of us, too.