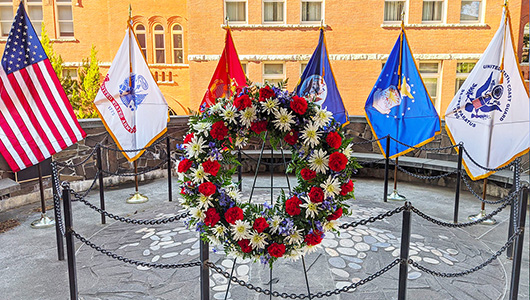 With the usual in-person gatherings unable to take place this year, faculty, staff, and students across the WSU system celebrated Veterans Day a little differently. Student-veteran Chris Mann produced a special video to share the traditional wreath placement at the WSU Pullman Veterans Memorial and to honor and thank veterans throughout the WSU community.

Mann, a senior majoring in psychology and criminal justice who spent eight years on active duty in the Marines fighting in both Iraq and Afghanistan, is president of the ASWSU Student Veterans Committee.

“Viewers will see the WSU Veterans Memorial, the service flags flying, and hear taps being played,” Mann said. “I wanted to film the scene so it would look exactly the same as if you were there in-person watching the ceremony.”

The pre-recorded video features testimonials from students in history, music education, social sciences, and other programs, sharing what Veterans Day means to them, as well as messages from WSU President Kirk Schulz and Joel Schwartzkopf, the executive director of Cougar Health Services and a former captain in the Wyoming National Guard.

Jaime Nolan, associate vice president for Community, Equity and Inclusive Excellence in the Division of Student Affairs, said for many people, unless they served in the military or have a family member who did, this holiday may seem a little abstract.

“Even though my father fought in the Korean War, growing up, Veterans Day was not particularly significant to me,” Nolan said. “Hearing our student veterans share part of their story will provide a meaningful connection and give us a depth of understanding that we would not have otherwise.”

Mann is no stranger to making videos. When he isn’t studying, he can sometimes be found exploring remote places around the country shooting footage for the Outdoor Channel or other adventure networks. He even built an editing studio in his Pullman apartment.

“I know a video can’t fully replace the feeling of witnessing the veteran’s ceremony in person, but I enjoy making films and telling stories from behind the camera,” Mann said. “This project is something I really wanted to do, and it has been a good challenge.”

Top image: The WSU Veterans Memorial on the Pullman campus.

By Steve Nakata, Division of Student Affairs, for WSU Insider.