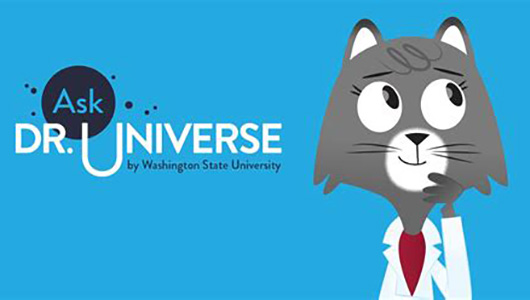 There are more than 34,000 species of fish on our planet. It can be tricky to tell the age or sex of a fish, but biologists have come up with a few different ways to find out.

My friend Paul Wheeler, a fish biologist at WSU, told me all about it.

Using an ultrasound, a tool that can capture pictures of an animal’s insides, biologists can look at the fish’s anatomy. They can even tell if a fish is ready to spawn, or deposit eggs in the water.

There are also some outward characteristics that help us tell the sex of a fish. Wheeler is very curious about salmon. He said male salmon get darker and their colors are more intense than females. The males also have a big hook on their jaw and sharp teeth.

Researchers can also look at DNA, or genetic information, to learn different things about fish.

It takes time and scientific equipment to analyze the DNA from the fin, but it can help us learn if a fish is male or female.

Wheeler adds that even fins can sometimes signal if a fish is male or female. Male sharks have a pair of fins called “claspers.” Male mollies also have a special set of pointed fins near their rear ends.

One fish that can switch sexes is the clownfish. All clownfish are born male. But some can switch their sex to become a dominant female later in life.

It turns out that determining the age of a fish can be a bit tricky, too.

“Fish tend to grow based on their resources and how much space they have,” said Wheeler.

If one trout grew up in a mountain stream where there weren’t very many bugs to eat and another grew up in a big lake with lots of bugs or shrimp or other fish to eat, they would be different sizes.

We have to rely on outward characteristics or analyze fish scales to determine age. Biologists use scales of a fish that form yearly rings to count their age. It’s a lot like counting the rings of a tree.

Who knows, maybe one day you’ll be a biologist and help us learn even more about the fascinating lives of fish.