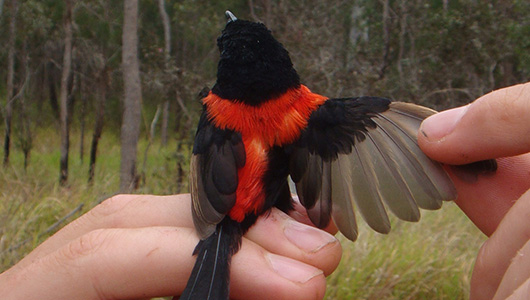 Fire can put a tropical songbird’s sex life on ice.

Following habitat-destroying wildfires in Australia, a team of researchers led by WSU biology doctoral student Jordan Boersma found that many male red-backed fairywrens failed to molt into their red-and-black ornamental plumage, making them less attractive to potential mates. They also had lowered circulating testosterone, which has been associated with their showy feathers.

For the study published in the Journal of Avian Biology, the researchers also measured the birds’ fat stores and the stress hormone corticosterone but found those remained at normal levels.

“Really, it ended up all coming down to testosterone,” said Boersma. “There’s no evidence that the birds were actually stressed. Wildfire was just interfering with their normal, temporal pattern of elevating testosterone and then producing that colorful plumage.”

While the findings are specific to this tropical songbird, they may have implications for other species that don special coloration for mating, Boersma added.

“It could be a good way to gauge how healthy a population is if you know their normal level of ornamentation,” he said. “If you see that there are very few males undergoing that transition, then there is probably something in their environment that’s not ideal.”

Without the elevated testosterone, male red-backed fairywrens are not so red. Instead they have drab, brown feathers much like their female counterparts. Ornamental feathers can make them stand out to predators and cause conflict with competing males. As Boersma puts it, the flashy feathers are “costly.” Their only advantage is in attracting female fairywrens.

“The females prefer to mate with a male fairywren who is prettier,” Boersma said. “Testosterone is just one of the mechanisms that they use to get their ornamentation.”

In an earlier study, Boersma and his colleagues showed that testosterone helps the fairywren process pigments in their diet called carotenoids to create their colorful feathers. This study adds further evidence of that connection as well as the birds’ response to wildfire.

While other research has looked at how wildfire impacts long-term survival of birds and other animals, this is one of the few studies that look at how wildfire may affect the birds’ physiology.

Red-backed fairywrens are used to living with periodic wildfires, and the researchers suspect that the suppression of testosterone is an evolved response. Wildfires can destroy the birds’ grassland nesting habitat, so it is a signal that it might not good time to raise their young. The male birds then may inhibit or delay breeding by remaining brown and unattractive to mates.

For this study, the researchers observed and took blood samples from the fairywrens for five years at two different sites in the tropical northeast part of Queensland state in Australia. This allowed them to compare birds living at times and places that experienced wildfire with those that did not.

The male red-backed fairywrens typically wait for the monsoon season to molt into their bright colors when the rains bring more of the insects they eat out into the open. The researchers wanted to be sure it was the wildfire and not a dry season that was affecting their testosterone levels and feather color. During the study period, there was an unusually dry season, and the researchers observed minimal breeding among the birds, but yet the males were still producing ornamentation at a normal level. It was only post-fire that the many of the male birds stayed brown.

The researchers not only found that more males remained brown immediately following the wildfire event but also that the testosterone was lower in the brown males—and lower in the population at large relative to previous years without fires.