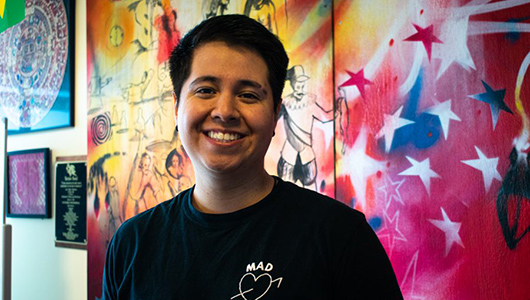 Many members of the Chicanx Latinx Student Center have their own ways of celebrating their shared backgrounds during Hispanic Heritage Month.

One of these students is G. Sam Lopez, senior political science major. Lopez said he is a student mentor who has been a part of the CLSC since he started at WSU.

“I was a mentee at the center my freshman year when I first came here,” Lopez said. “I became a mentor my sophomore year and haven’t stopped.”

Lopez said he has spent a good part of his life celebrating and understanding his culture.

Many in his family have participated in protests and other similar events to help improve the lives of those with similar backgrounds, he said.

“My parents were activists, my grandparents were activists. So I kinda grew up that way,” Lopez said. “Myself, I’m interested in politics, so for me it was always easy to care about our heritage, growing up in America and seeing the struggles some of our people have faced.”

Lopez said he chose to continue embracing his family’s heritage by joining the CLSC. He also did so to help students who felt there was no one with a similar cultural identity.

“Just having the fourth floor [of the Compton Union Building] as a safe space where we know we’re gonna see someone who looks like us and is gonna speak like us is really nice,” Lopez said.

Martin Navarrete-Contreras, senior construction management major, has served as a CLSC mentor since last year, despite the challenges with COVID-19. He said he rejoined at the beginning of this year and has served as a mentor for many younger students there.

Navarrete-Contreras said he also has a lot of knowledge of his heritage from his family.

“I’m a first-generation college student.” Navarrete-Contreras said. “I have a lot of family with knowledge of their heritage. All of them carry their heritage from Mexico.”

The CLSC is planning some events during Hispanic Heritage Month, which is Sept. 15 through Oct. 15.

“We did one recently with [Athletics] where we went to a soccer game and brought a bunch of Latin American flags,” Lopez said. “They played Spanish music and had dancing, and it was really cool.”

Both Lopez and Navarrete-Contreras said any students who are interested are welcome to visit the CLSC, which is on the fourth floor of the CUB.

“This place is for all students,” Lopez said. “I fully recommend it, especially if they have not been here before.”