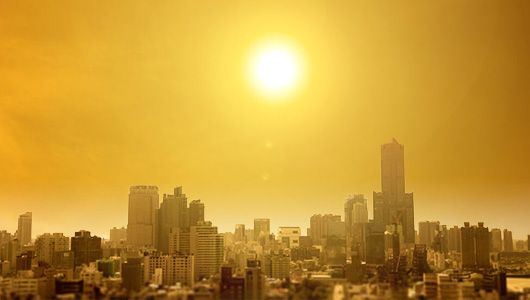 The world is not only getting hotter but also more humid, and new research by WSU environmental scientists shows people living in areas where humid-heat extremes are already a significant hazard are bearing the brunt of the impact.

“We identify a greater increase in population exposure to humid-heat as compared to dry-heat, emphasizing the importance of understanding humidity changes in a warming world,” said study lead author Cassandra Rogers, a postdoctoral research associate in the WSU Vancouver School of the Environment.

The study, published earlier this month in the journal Geophysical Research Letters, presents the timing, frequency and severity of extreme heat events and recent trends using hourly data at a spatial resolution of about 25 km or 15.5 mi.

Most of Europe, northern South America, Africa, the Arabian Peninsula and the island chains between the Indian and Pacific Oceans, as well as the Northern Hemisphere oceans, have experienced statistically significant increases in both dry and humid-heat extremes, according to the researchers’ analysis.

However, a few regions of the planet showed trends that are particularly worrisome.

“For example, increases in the occurrence of humid-heat were strongest over highly populous regions in South and Southeast Asia and southeastern U.S. where changes in dry-heat frequency, as measured by temperature alone, are small or non-significant,” said study coauthor Deepti Singh, an assistant professor in the WSU Vancouver School of the Environment.

Rogers and Singh’s work suggests that increasing irrigation intensity could be increasing humidity and consequently extreme humid-heat, since a large fraction of land-area in these regions is croplands and the timing of high irrigation rates over places like India coincide with the warmest temperatures.

The consequences could be severe unless efforts are taken to reduce the impact on vulnerable workers.

“With many areas in these regions already approaching the survivability limit of heat and humidity, manual, labor-intensive outdoor work such as agricultural activities, construction and pulled- or cycle-powered rickshaw transport could effectively become infeasible during the hot parts of the day for much of the year,” Rogers said.

Given the higher-population exposure to humid-heat and its projected increases, particularly in vulnerable areas, the researchers’ findings emphasize the need to better understand their societal impacts.

This could be done by considering the timing of how such extremes intersect with the timing of location-specific human activities, demographics and socio-economic factors that enhance vulnerability to heat stress.

In the future, developing a greater understanding of the human health effects of humid-heat stress will be of particular importance to communities with vulnerable workers that are directly exposed to extreme heat, such as farm and urban outdoor laborers as well as people with limited access to air conditioning, electricity, community cooling centers and health and emergency medical services.

In addition to Rogers and Singh, the research team for the study included scientists from Syracuse and Columbia Universities in New York and NASA’s Jet Propulsion Laboratory in California.

Their work for the project includes data from weather stations on every continent as well as another climate dataset – ERA5 reanalysis – that provides hourly weather conditions across the entire world for the past 42 years. The ERA5 data have not previously been used to study humid-heat extremes.

By synthesizing multiple observation sources, including weather stations, ocean buoys and satellite data, the newly available ERA5 data have allowed the researchers to examine heat extremes over all land and ocean regions, including many previously poorly observed and studied locations.

“Our study extends previous research to provide information on changes in dry and humid-heat extremes for understudied regions of Africa, Southeast Asia and South America, where reliable, long-term, station data is limited,” Singh said. “Further, we show that strong increases in extreme heat frequency are accompanied by an expansion of the number of months during which they occur, which has consequences for human health and outdoor activities in these regions.”