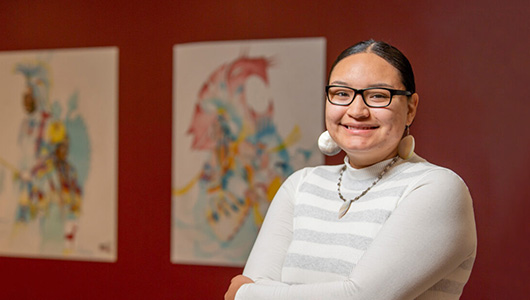 From a young age, Ermia Butler knew she would pursue a career that would support her tribe, but she didn’t quite know what it would be.

“I’m a first-generation student, but in high school I was supported really well,” Butler said.

An enrolled member of the Confederated Tribes of the Umatilla Indian Reservation, Butler grew up in Pendleton, Oregon, on tribal land, where she attended the reservation’s charter school. Her teachers, many of them college-educated, provided her with strong role models and helped her apply to college.

“For some Native students, if they do want to attend school and no one can help them, they have to figure it out on their own and struggle with the process,” Butler said.

That’s why Butler is part of Multicultural Student Services’ mentor program, where she is paired with a first-year student to help guide them at WSU.

“I connected with my mentor really well, she referred me to resources on campus and she was so helpful with everything, like ways to study and be proactive,” Butler said. “She inspired me to be a mentor. My culture is a big part of my life, and I wanted to do everything I could to get involved and spread awareness on campus.”

Butler is a junior studying environmental and ecosystem science. She is also co-chair of Ku-Ah-Mah, a Native student organization at WSU named after the Nez Perce word for cougar, and a member of Alpha Pi Omega, the nation’s oldest Native American Greek letter organization.

“After graduation, I want to focus on projects like increasing fish habitats, bringing back wildlife, and preserving the land. I also want to work with other tribes and get to know their culture,” Butler said. “We’re all the same, but each tribe is a little different in their own way.”

In 2018, the Graduate and Professional Students Association (GPSA) at WSU passed a resolution to change Columbus Day on the second Monday in October to Indigenous Peoples Day, prompting the university to adopt the resolution as well. The GPSA intended the new holiday to encourage students to remember the U.S. government’s colonial legacy, as well as provide WSU students, faculty, and staff a way to connect with today’s Indigenous communities.

In 1890, Washington state received more than 90,000 acres of Indigenous land to establish WSU. One of the tribes that lived on that land was the Nez Perce, Nimíipuu in their own language, meaning “we, the people.”

For non-Native students and faculty, Butler said attending events hosted by Native groups on campus is an easy way to connect and learn.

“Get involved with our programs and get to know us,” Butler said. “We do a lot of promoting for our events, but people think that because it’s a Native American event they have to be Native to attend it. But we’re inclusive and welcoming to everyone.”