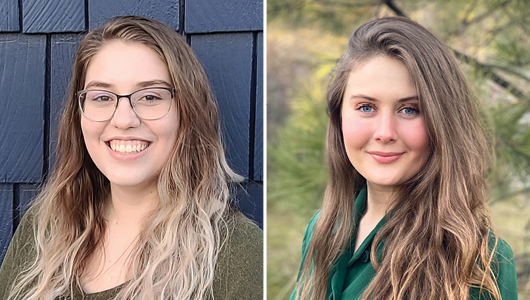 An aspiring international lawyer and a budding business analyst were honored as gonfalon bearers for the College of Arts and Sciences during separate commencement ceremonies Saturday at WSU Pullman.

Nicole Craze, a political science major who aims to become an attorney specializing in international law and diplomacy, carried the college’s shield-shaped banner at the ceremony celebrating WSU graduates of the fall 2021 semester.

Emily Paup, who graduated in spring 2021 with a double major in psychology and business administration and now works as a marketing analyst, carried the CAS gonfalon in a special, combined ceremony for her graduating class and graduates of spring and fall 2020, whose commencements were delayed because of pandemic restrictions.

Selection as a college’s gonfalon bearer is a prestigious recognition awarded to a graduate with a record of outstanding achievement. Earlier this year, both Craze and Paup were also chosen by their respective departments to receive the CAS Outstanding Senior Award.

At WSU, she founded and served as president of the Mindfulness Based Emotional and Social Intelligence Student Organization. She also worked as an information technology technician for the Crimson Service Desk and as a junior counselor for the Association of Washington State Student Leaders’ leadership camp. She received the Outstanding Delegate Award from the National Model United Nations.

Craze’s undergraduate research focused on affective polarization in college students, using WSU as a case study, to look for a correlation between the number of semesters of college completed and the level of polarization.

One of her political science professors, Cornell Clayton, described her as among “the most engaged, prepared, and conscientious students I have had the pleasure of teaching in over 25 years at WSU.”

Another professor, Travis Ridout, praised her as “a stand-out student… extremely clever and incisive in her analysis of the sometimes-difficult concepts that we discussed. I wish every student were like her.”

She was involved in research projects as an intern for NewEdge in Richland, Washington, and as an undergraduate assistant with the Affective and Cognitive Influences on Decisions Laboratory and the Center for Behavioral Business Research, both at WSU.

Paup was a WSU Regents Scholar and received a number of prominent awards, including the Delta Sigma Pi Key Scholarship; the Barney Education Abroad Scholarship; and the Mark and Laura Hansen International Scholarship. In the summer of 2019, she participated in a faculty-led study-abroad program in Greece.

One of her instructors, WSU psychology alumnus Amy Nusbaum, praised Paup’s “enthusiasm, problem-solving abilities, creative thinking, and overall desire to better herself and those around her.”

Paup’s long-term goals include fostering new talent and using her leadership and mentoring skills to elevate others.