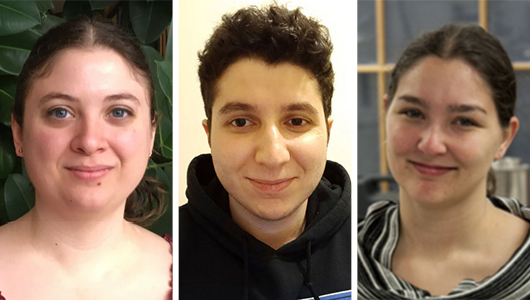 Scholars in mathematics, political science, chemistry, and physics rose to the international competition’s hallmark challenge of verbally explaining their work in only three minutes, with just one visual slide, and in terms non-specialists can understand. The first- and second-place winners were chosen by a panel of CAS judges and the “people’s choice” orator was selected by the audience to receive scholarships for fall 2022.

Political science doctoral student Furkan Cakmak was named runner-up in the CAS semifinal event and received a $750 scholarship for succinctly explaining his research into the causes of affective polarization in politics with respect to emotions and media choices.

Winner of the People’s Choice award, chemist Margaret Reece, received a $500 scholarship for quickly describing her novel study of the use of bacteria for mitigating environmental contamination from nuclear energy applications and preventing accumulation of radioactive materials in the future.

Dickson represented the College of Arts and Sciences in the WSU-wide 3MT competition on March 24.

The international 3MT research communication competition challenges PhD students to present a compelling oration on their thesis and its significance in just three minutes and using just one visual slide. Participants hone their academic, presentation and research communication skills by effectively explaining their research in language appropriate to a non-specialist audience.