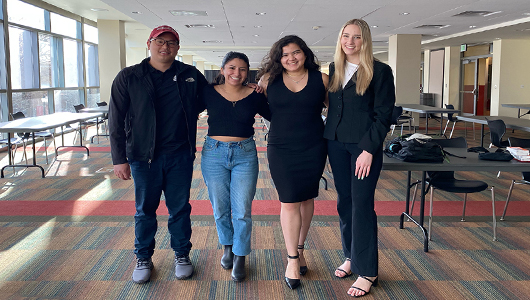 An interdisciplinary team of undergraduate students is developing a smartphone app to help Pullman residents and visitors connect with local businesses.

“The biggest barrier we’ve identified is people not being knowledgeable about what businesses have to offer,” said Marley Schneider, a digital technology and culture and advertising dual major and co-leader of the project.

Whether it’s finding a place to get a tire patched or a cup of coffee, the five-member team is determined to get local businesses front and center in the minds of WSU students and the Pullman community. The project is also a valuable learning opportunity for the team that’s bound for the workplace in the years to come.

The app—Local Cougs—will provide potential customers with information about the businesses around town and ideally generate vital economic engagement. Local Cougs is currently in the prototype stage, with plans for beta testing this summer.

The team is co-led by Schneider and Jennifer Espin, a civil engineering major minoring in mathematics. Computer science students Daniel Chia, Stephany Lamas, and Roshani Shiwakoti are working on coding and development of the app.

The idea of finding a way to better connect the Pullman community, and particularly students, to local businesses was pitched to Schneider and Espin by the director of entrepreneurial studies at the Voiland College of Engineering and Architecture’s Harold Frank Engineering Entrepreneurship Institute, Ray Combs. Combs told the pair that Elizabeth Chilton, WSU system provost and the inaugural Pullman campus chancellor, was particularly interested in finding a way to help local businesses emerging from the pandemic.

“I was really excited for the opportunity to learn more about the business and marketing aspect of engineering,” Espin said. “That’s really where the entrepreneurship center came in and presented this opportunity to talk with local businesses and get better connected with people in the industry.”

In the past year and a half, Schneider and Espin have met with local business owners and advocates to get a sense of their situations and what they can do to help them thrive. Conversations with students have also netted valuable insight into the perceived barriers between them and the businesses right on their doorstep.

“We identified a lack of enthusiasm among students for going downtown, so we’re looking to create an incentive within the app that rewards people who use the app at downtown businesses,” Schneider said, citing examples like a free smoothie at Sanctuary after attending two yoga sessions.

While Schneider is on track to graduate in May, she plans to continue to be involved with frequent visits and remote collaboration with the team.

“Because we have a big cohort, we’ve been thinking about bringing more people onto the team, to be able to get as many hands working on the prototype as possible,” Espin said. “We need to grow to get this project out, and we’ve been fortunate to have great advisors helping us out.”

Combs has been particularly impressed in the team’s efforts to understand the problem that the app aims to solve: local businesses’ lack of marketing horsepower compared to larger chains.

“They’ve done good boots on the ground research, talking to local business owners and commerce people to understand what business need for this app,” he said. “It’s really encouraging that they’ve done this kind of work, because understanding the problem their technology aims to solve is the kind of effort that engineering teams [often] fail at.”

In addition to preparing the app for beta testing in the months to come, members are also gearing up for the university’s annual business plan competition later this semester.