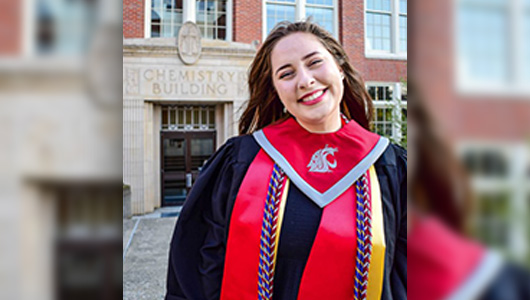 Brianna Knode (’22) initially considered WSU as a safety school when she was applying to colleges. She toured the Pullman campus out of convenience, only to fall in love with the friendly environment and the “Cougs help Cougs” mentality.

“I got the chance to directly meet with my current academic adviser, Jeremy Lessman, [and] after my tour, he called me and asked if I had any further questions,” Knode said. “[He] was very personable and helpful in answering any questions I had. That personal touch is what really drew me to WSU.”

Knode is graduating this spring with dual degrees in chemistry and genetics and cell biology.

“I took two chemistry classes in high school,” Knode said. “I was like the only student who enjoyed the class. I thought that was a bit [telling] that this was a good subject for me.”

In addition to falling for WSU, she also fell in love with cell biology and genetics.

“[Genetics is] one of those classes people either love or hate. I’ve heard a lot of hate on it, but I adored it,” Knode said. “I randomly decided to take on a second major, and later realized I had enough credits to do a second full degree.”

Knode entered WSU as a Distinguished Regents Scholar and soon became an undergraduate research assistant in Professor John Wyrick’s molecular biosciences lab to boost her pre-medicine resume. She enjoyed undergraduate research because it allowed her to explore interdisciplinary topics and other subjects related to her degree. It also helped narrow her focus on future research subjects.

One or her biggest accomplishments, she said, was earning a nationally competitive scholarship through the DAAD RISE program. The scholarship enabled her to study for a semester abroad at at Philipps University in Marburg, Germany, where she conducted research on small-cell lung cancer and completed an Honors College independent study course in which she researched the importance of music in German culture and history.

Knode said she is proud of her resilience: she switched majors as an undergraduate, had to take most of her classes online during the pandemic, and still earned two degrees in STEM.

Her mentors have witnessed her passion and drive grow throughout her time at WSU.

“I wouldn’t be surprised to see Brianna…eventually become the head of a lab and find out amazing things,” said Marian Laughery, a School of Molecular Biosciences graduate student.

Knode’s advice for future students is to enjoy the social aspects of their time at school.

At first, she was reluctant to join campus clubs and make connections. She said forming relationships with professors and others helped her succeed in college, so students should be intentional about seeking out opportunities.

“It is important to make connections with people, and I feel like that is what I was told,” Knode said. “I did not take it to heart, and it made things a little bit more difficult until I realized that it’s a great thing to do to make those connections. I kind of wish I had listened a little bit earlier.

“I came into college quiet and had a really hard time meeting people and making new friends,” she said. “[Through] those programs, and WSU in general, I’ve learned how to put myself out there, communicate more efficiently and interact with people. It has helped me professionally, academically, and in my personal life making new friends.”

During her time at WSU, Knode served as the vice president of community service for the WSU chapter of the National Society of Collegiate Scholars. She also completed all three levels of the WSU leadership program. Knode said those programs shaped her social development and ability to communicate.

When looking back, Knode found the football games to be a memorable part of her time at WSU. She liked bringing her family to the games and meeting new people.

“I think it is a great way to connect to the WSU community,” she said. “Going forward, I’m going to take [the memories] with me because the atmosphere was very memorable and made me really feel like a community member here at WSU.”

Knode will begin her doctoral studies in biomedical and biological sciences at Cornell University in August. Her research will focus primarily on cancer biology.

“I couldn’t imagine doing anything else with my life other than science,” she said. “I knew it [would be] tough, but I enjoyed it enough that it makes it worth it.”

Adapted from a story by Grey Kamasz, The Daily Evergreen