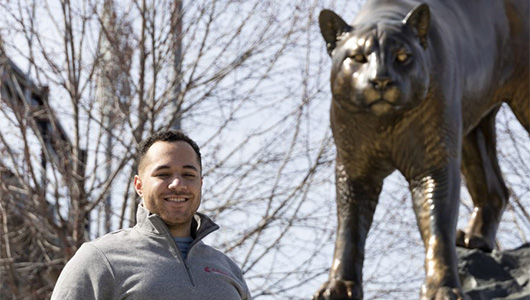 Jelani Christopher (’22 Poli. Sci.) has always been interested in how  government can help create a better society. During his time at WSU, he put his passion into practice as an ASWSU senator and played a key role in establishing the Cougar Food Pantry on the Pullman campus.

“It was a great experience being able to leave something behind that will help students in the future,” Christopher said. In addition to serving on the pantry’s advisory board, he worked with fellow ASWSU senator Nife Shola-Dare to draft a proposal for a small student fee of $5 per semester to fund the food pantry. They presented the fee request directly to students in a referendum that passed in June 2020 with 70% of the vote.

Shae McCarron, AmeriCorps food pantry coordinator, worked with Christopher and others to set up the food pantry, which is now located on the ground floor of the Compton Union Building (CUB).

“He’s always thinking about how things are impacting the people around him,” McCarron said. “He’s really dedicated to making this a better place. He always wants to make sure we’re doing things with the most mindful interest and the best interest for everyone involved.”

McCarron said the advisory board appreciates Christopher for the difference he made in setting up the food pantry, and encourages other students to try to make a difference themselves.

“I don’t think he realized how big this was going to be. I think he did it with the best interest of the students in mind,” McCarron said. “If you think you can make a difference, make a difference. Just do what you can do to make it happen.”

Hailing from Fremont, California, Christopher chose to attend WSU because of the variety in Pullman’s weather, the friendliness he experienced on campus, and the opportunities WSU offered for his major.

One of his favorite academic experiences was a special topics class that focused on the 2020 presidential election, following the news and talking about the debates and different aspects of the election.

Christopher, the first in his family to attend WSU, recommends students take advantage of all the resources and opportunities available at WSU. In addition to his three years in student government, he worked in the WSU Writing Center, was a member of the Young Democrats, and helped to put on several issue-based forums.

“Go to class and talk to your instructor and just meet people. Really let yourself accept that it’s a time in your life where you might fail and you might succeed at things, and everything is an opportunity for growth,” Christopher said. “Don’t be discouraged by anything that might not turn out great the first time because there’s always another day to keep working. So make the money worth it and go have fun.”

After graduation, Christopher plans to work as a middle school teacher for Teach for America, a nonprofit organization that recruits college graduates to teach in low-income communities. His long-term career goals include eventually influencing widespread change in the U.S. government.

Adapted from a story by Josiah Pike, Daily Evergreen.