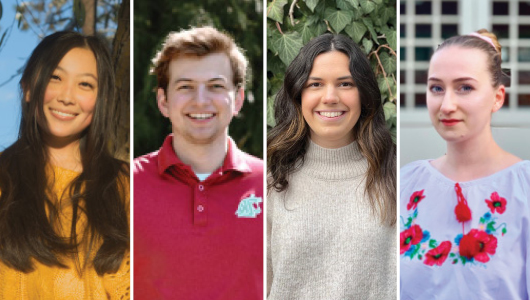 An international researcher, a police cadet, a certified nursing assistant, and a young mother who speaks five languages (in addition to baby talk) are among the 24 College of Arts and Sciences students named Outstanding Seniors of 2022, all of whom are exemplary in their academic achievements, leadership, and service to the community.

With roots across the Northwest to Hawaii, Nicaragua, and Ukraine, they are Regents scholars, Fulbright awardees, Honors College graduates, writers, athletes, scientists, musicians, artists, activists, and adventurers—and all are well poised for success in careers or graduate or professional schools.

The College of Arts and Sciences academic degree programs at WSU Pullman choose one student each year who exemplifies the best qualities of their graduates, including outstanding academic accomplishments and a dedication to learning, leadership, and service. Family members and friends of this year’s Outstanding Seniors gathered in Kimbrough Concert Hall for a recognition program the day before the WSU Pullman commencement ceremony.

Honored students of 2022 include:

A National Merit scholar from Aurora, Colorado, who earned minors in music and physics, Annie was a National Science Foundation-funded research assistant and a member of the WSU Flute Choir and Wind Symphony. In addition to practicing and performing music, she worked as a grader for two math classes and as a teaching assistant for Calculus I, instructing two lab sessions per week and tutoring fellow students.

During her final year of studies, she worked remotely as a research intern at Technical University Berlin in the theoretical physics department, exploring synchronization behavior and high-order dynamics in systems of coupled oscillators found in network systems. In her NSF- funded research, she helped develop computational models for stochastic processes to improve understanding of cell motility and other biological processes. Research papers are forthcoming from both scholarly projects.

Annie’s numerous academic honors include a Fulbright Research award for Budapest Semesters in Mathematics and a prestigious WSU Carson Undergraduate Research Fellowship. One of WSU’s Top 10 Seniors of 2022, she also carried the CAS gonfalon at the WSU Pullman commencement ceremony.

With his sights set on a career in law enforcement, Noah made the most of his student years by joining the WSU Police Department Cadet Program, where he received training in criminal justice and security work and participated in patrols and ride-alongs with campus police officers. He obtained CPR and first aid certification and worked as building manager for the Chinook Student Center, overseeing daily operations and maintenance. Noah is from Irvine, California, and earned minors in history and Spanish.

A history buff and a member of the WSU Honors College, he wrote his research thesis about the effect of divorce on youth substance abuse. Noah served as a resident advisor for WSU Housing and Residence Life and was active in Chi Alpha Christian Fellowship and the WSU Marching Band.

“My time at WSU has been so amazing and there’s so much I have learned, however, one lesson stands out above all else: the importance of community,” Noah said.  “Once I stepped on this campus, I immediately learned what it means to be part of the Cougar family,” he said. “Although I knew no one when I arrived in Pullman, there was never a moment when I felt alone (even during COVID). I immediately became friends with people in the Marching Band, through the WSUPD Cadet Program, through Chi Alpha, and in my classes. I have received so much support from my friends and fellow students and I’ve felt welcome wherever I went on campus.”

A Regents scholar from Gig Harbor, Washington, who also earned a minor in chemistry, Lauren served the campus and community as a clinical volunteer at a local hospital and as a virtual teaching intern, creating interactive presentations for non-English speaking students. She also worked as a certified nursing assistant, doing pre- and post-surgery care; as a teaching assistant in WSU’s Human Anatomy Lab; and as a hotline advocate for Alternatives to Violence on the Palouse.

A CAS student ambassador and chair of academic excellence for Kappa Delta sorority, Lauren contributed to research leading to new understanding about environmental catalysis-focused reactions and applications of metal organic frameworks. She earned a Crimson Award—given to only the top-scoring students—in WSU’s Showcase for Undergraduate Research and Creative Activities.

A 17-year resident of Washington, originally from Ukraine, Vanesa enrolled at WSU Pullman after earning an associate of arts degree as a Running Start student in high school. She was active as a Spanish language instructor and tutor and as a translator of other languages she acquired through life: Ukrainian, English, Russian, and Korean. She was active with the WSU Russian Club and Korean Conversation Table and is passionate about learning languages.

“I believe that to acquire a foreign language means to acquire a different worldview, a different way of thinking and processing the things around me. Being multilingual gives me the ability to form interpersonal connections with people from entirely different realities and worlds, made of entirely different substances, and develop cultural awareness and understanding in ways one can only through language. Language enables me to see the bottom of the cultural iceberg and understand not only the what and how of peoples’ actions but the why as well. Being multilingual also gives me the opportunity to expand and evolve my intrapersonal connections, through which I find my own place within different cultures and see how each and every one of them forms an integral and inseparable part of my own identity.

“I aspire to become a foreign language teacher, where I can hopefully infect others with my passion for foreign languages and cultures, reflect back on my own journey of foreign language acquisition and guide other students through theirs, and prepare and equip my students to become active, linguistically resourceful, and communicatively competent members of our global society.”