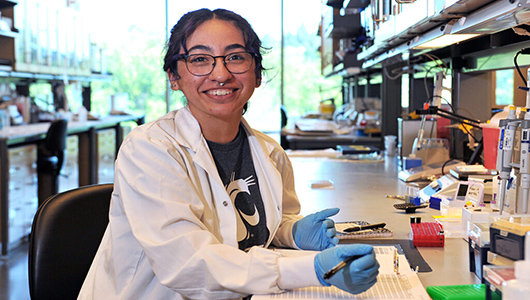 As a Hispanic woman from southern California, Alexandra Malena questioned just how welcome she would feel at Washington State University’s rural Pullman campus.

As a psychology and neuroscience double major, she also found herself asking how she would fare in WSU’s curriculum.

“Being first-gen and in a STEM field, I always had these doubts in the back of my mind,” Malena said. “But I quickly found a group of people here who helped me feel welcome and comfortable.”

Funded by the National Institutes for Health, the two-year program offers undergraduates in STEM from underrepresented backgrounds research opportunities during their junior and senior years, including a 10-week summer research experience at a research university, and invitations to several national research conferences.

The program—one of many at WSU geared to underrepresented students—also covers 60% of tuition and offers a more than $13,000 stipend.

In addition to financial and peer support through the program, Malena, whose father is from Argentina and mother is from Mexico, said the program has helped her believe in herself when imposter syndrome kicks in.

It also pushed her to explore her passion for the brain and add a second major.

“The aspect I love about psychology was learning about the brain, so I felt I should probably be studying neuroscience too,” she said. “My time in the lab kind of set in stone that research is what I want to do, and neuroscience is the path I want to go.”

Her confidence has also been boosted by a pair of awards, the WSU Showcase for Undergraduate Research and Creative Activities award and an award from the WSU Louis Stokes Alliance for Minority Participation (LSAMP).

She knows now she wants to research a disease that runs in her family: Alzheimer’s. Two aunts on her father’s side suffer from the degenerative disease, and it also is common on her mother’s side.

“I’ve seen a lot of family members go through Alzheimer’s and lose the battle, so it’s just something that has been instilled in me since I was little,” Malena said. “One of my aunts, she has had it the past eight years; she’s not doing well.”

The experience is not one she wants anyone else to go through, and it led her to pursue her “ultimate dream” – to cure the brain disease.

“I know that it is really far out there, but that would be my ultimate dream,” Malena said.

At WSU, Malena is working to make that dream a reality by starting her research career early as an undergraduate.

Since coming to WSU in 2019, Malena has been a co-author on a maternal cannabis prenatal project to measure the emotional reactivity, anxiety-like behavior, and cannabis-seeking behavior in offspring of rat dams exposed to cannabis.

She is now leading her own research project. This summer she will run the second cohort examining cannabis-seeking behavior in rats using pull levers to administer cannabis vapor.

“This is science that we are conducting that will be published and be in the science world forever. I think it is really cool, especially because it is cannabis research that is fairly new,” Malena said.

Malena is on track to graduate in May 2023. She plans to explore graduate schools this summer, and she isn’t ruling out extending her stay in Pullman.