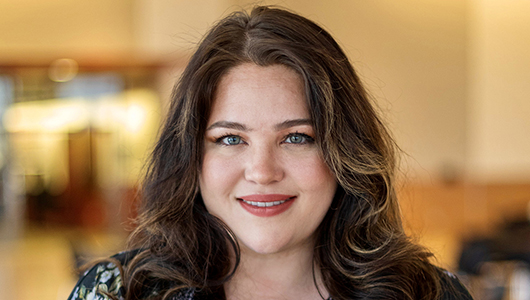 Reanne Cunningham Chilton, a clinical psychology doctoral student who has worked with populations ranging from young children and university students to retirees and incarcerated men, is serving as the new student regent on the WSU Board of Regents for academic year 2022–23.

Selected by Washington Gov. Jay Inslee, Chilton is in her fifth year of her doctoral program, having already graduated from WSU with a bachelor’s degree in Spanish language teacher education and a master’s degree in special education and teaching.

Chilton has been involved with the Department of Psychology’s student organization and served as a senator for the department in the Graduate and Professional Student Association, winning its senator of the year award in 2021. She most recently held the role of GPSA president this past academic year.

“I tend to not be someone who thinks of themselves for different roles, but when it came to the GPSA presidency and before that with my work within my department, I decided not to be the person to decide I don’t fit and I felt that I could make an impact.”

Chilton was also recently recognized as a recipient of the President’s Award for Leadership. Maureen Schmitter-Edgecombe, a Regents professor in the Department of Psychology who wrote a letter in support of her doctoral student, said Chilton has gained tremendous confidence while making strides as a student leader.

“Reanne has seen that she can make a difference and that is so important to her because she’s always putting others first,” Schmitter-Edgecombe said.

From teacher to clinical psychologist

The path taken by Chilton — a Tri‑Cities native — has been anything but typical.

As a high schooler surveying her higher education options, her family welcomed a baby boy, Kaleb, to the family.

“Being connected to my siblings and family is the most important thing to me, so the idea of leaving for college and being away from my infant brother wasn’t fathomable,” Chilton said.

Luckily, the WSU Tri‑Cities campus was close by, allowing Chilton to stay local while pursuing her undergraduate degree. She eventually left Tri‑Cities to continue her studies at the WSU Pullman campus, where her anticipated course deviated significantly.

Originally, Chilton planned to join the Peace Corps after finishing her undergraduate degree and move on to teaching. After visiting a friend in the Peace Corps and leading workshops in Guatemala, Chilton opted instead to follow up on the recommendation of Richard Lamb, one of her education professors, and pursue a master’s degree.

“I initially wasn’t really sold about staying in school,” Chilton said. “I am the first person in my family to go to college at all, and so graduate school felt a bit beyond my imagination.”

Her first question when the topic of graduate school came up was about cost. Her concerns were relieved upon learning about the variety of assistantships and scholarships available to her, and she opted to continue her studies at WSU.

During her practicum work within K–12 schools, Chilton realized that being a trusted person in someone’s life was something truly special. That realization, coupled with a burgeoning interest in psychology, led her to pursue a clinical psychology PhD and to work in Schmitter-Edgecombe’s lab. The goal of the lab is to use emerging technology to help older individuals, particularly those with cognitive challenges, function independently and live a high‑quality of life for as long as possible.

“Since I’ve known Reanne, she’s changed her mind so many times, but behind it has always been a desire to be an advocate for people in need and strive to improve the lives of others,” Schmitter-Edgecombe said.

Getting to work with an older population was new for Chilton but she quickly found her footing.

“I really enjoyed getting to work with older adults, especially teaching classes on brain health at a local hospital,” Chilton said.

During her doctoral studies, Chilton also worked as a counseling assistant at the WSU Psychology Clinic, where she provided therapy to students and community members. She also served as a student counselor for Cougar Health Services’ Counseling and Psychological Services.

Most recently, Chilton has been visiting the Washington State Penitentiary in Walla Walla once a week to provide therapy, working with men with serious mental health challenges. During her time there, Chilton also headed up the formation of a mindfulness group, where men who historically lacked the opportunities to express their emotions were given tools and the opportunity to do so without judgement.

Chilton will transition next month to a telehealth role with UV Cares, where she’ll be providing therapy to children, adolescents and adults. She will apply this fall for a predoctoral clinical internship to be completed the next academic year. Chilton is expected to earn her doctorate in 2024.

In her role as GPSA president, Chilton was able to collaborate with Shain Wright, the most recent student regent on the WSU Board of Regents. Wright told Chilton about the role and she decided to apply, despite convincing herself she wouldn’t get picked. Ultimately, she was overjoyed to get the call that she’d be selected to serve as the next student regent.

“Student mental health is a major concern across the county and so within our system, I would like to use my position to promote any opportunities that we have to improve access to mental health services,” she said.

Ensuring a diverse group of counselors and mental health professions serving students is also an effort Chilton plans to push for as student regent. Chilton notes that research shows that individuals tend to feel safer when they can identify with someone who understands what they are going through, so having counselors with similar experiences to their patients is key.

Tammy Barry, vice provost for graduate and professional education, has been a mentor to Chilton in her advocacy and volunteer work over the years. Barry is confident Chilton will continue to thrive and be an outstanding representative for WSU’s students.

“Reanne has engaged in philanthropic fundraising and activism around issues including diversity, equity, social justice, anti‑racism, mental healthcare, stigma reduction, and healthcare access,” Barry said. “Through all of these activities, it is clear that Reanne’s impassioned and committed leadership is rooted in her values and I am confident that Reanne will be a bold and compassionate voice for all students on the Board of Regents.”