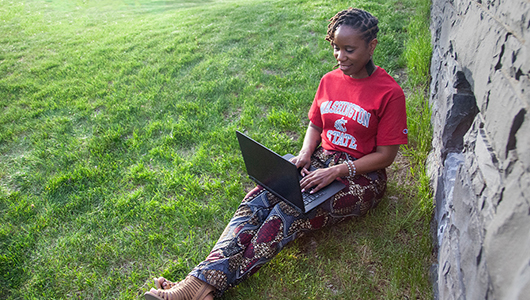 In 1992, Washington State University extended its land-grant mission by launching one of the nation’s first opportunities for students to pursue a degree from anywhere on the globe through distance delivery.

Today, our Global Campus is the second largest campus by enrollment in the WSU system with more than 4,000 students enrolled in one of 21 undergraduate majors, 13 graduate programs, or more than a dozen certificates, many of which are offered by the College of Arts and Sciences.

“We’re excited to celebrate this landmark in our history,” said Global Campus Chancellor Dave Cillay. “WSU has always been an innovator in higher education, and the university’s early adoption of distance learning is a great point of evidence for that.”

Over three decades, what was known in the early years as Extended Academic Programs would evolve into the 100% online WSU Global Campus, serving tens of thousands of students around the world.

“Global Campus has a rich and vibrant history that we are very proud of,” said Dave Cillay, Global Campus chancellor. “Our 30‑year legacy is built on the stories of tens of thousands of students, faculty, and staff that represent our worldwide community of online learning.”

The website will feature the first inductees into the WSU Global Campus Society of Distinguished Alumni when they are announced. Former students are invited to submit stories about their experiences at WSU Global Campus and will be recognized in the Global Campus Legends section of the website.

Digital assets such as celebratory Zoom backgrounds are also available on the site.

“This is a very important event for Global Campus, so we’re going to be providing opportunities for students and alumni to get involved and celebrate,” said Andria Donnenwerth, director of Global Campus’s Global Connections student involvement program.

The first event commemorating the anniversary is a virtual celebration and town hall scheduled for Sept. 14 at 5:30 p.m. Cillay and ASWSU Global President Remy Plate will speak to attendees and answer questions live over Zoom.

Global Campus will also celebrate the anniversary by inducting its first-ever members into the Global Campus Society for Distinguished Alumni during the WSU football game against Arizona State University on Nov. 12.

According to Cillay, the anniversary celebration is about recognizing the past, but also about looking ahead. “Thirty years down the road, the changes we see could be just as dramatic as the change from 1992 to today. We’ve always searched for and embraced the cutting edge of new technologies and learning innovations, which has led to the changes and improvements we’ve witnessed up to this point,” he said. “As we look to the future, we intend to keep pushing the envelope, always looking to the new horizons of innovation in higher education.”

Top photo: Today, Global Campus is the second largest campus by enrollment in the WSU system with more than 4,000 students enrolled in one of 21 undergraduate majors, 13 graduate programs, or more than a dozen certificates —