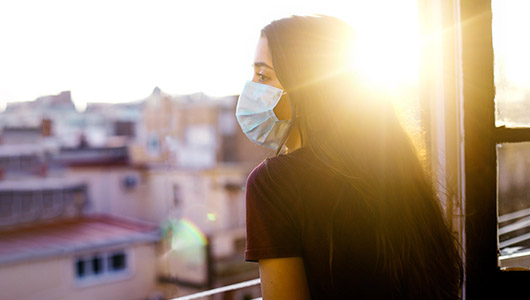 For the study, published in the Journal of Child and Family Studies, Washington State University researchers surveyed 215 teens ages 14–17 across the U.S. in July 2020 during the early months of the pandemic.

“Knowledge was a good thing. The teens who did better on our quiz tended to report lower depression, anxiety and stress – just across the board,” said corresponding author Chris Barry, a WSU psychology professor. “This is a one-time snapshot, so we don’t really know cause and effect, but one presumption is that having accurate information was connected to feeling a little bit more ease during that time.”

Barry, along with researcher Zeinab Mousavi and undergraduate student Brianna Halter, had study participants first answer true or false questions about COVID-19, such as the ways that the virus spreads and its health risks. While there were some low scores on the test, the majority of the participants did well with an average score of 15 out of 18 correct, and 21.9% got all the answers correct. The participants then answered a range of questions about their well-being as well as their social media use.

While nearly all the teens, 98.1%, used social media in some form, those who had good COVID-19 knowledge and checked social media less frequently also reported the lowest levels of anxiety.

While it is difficult to know the reason behind this connection, the researchers said that one possibility was that teens with less accurate COVID-19 knowledge might have used social media more to find answers and in the process, absorbed more misinformation which contributed to their anxiety.

Social media likely has a mixed effect on teens’ well-being, said Mousavi, a research assistant in Barry’s Youth Personality and Behavior lab and the first author on the study.

“There are so many factors with social media,” she said. “For instance, it’s good that you are staying connected with your friends and getting some information, but maybe at a certain point it is making some things worse, giving you more anxiety, rather than helping you cope with the situation.”

The researchers also surveyed the teens’ parents to assess the level of lockdown measures the adolescents were under. They found that the more restrictive quarantine measures were associated with negative well-being for the teens, but that teens’ perceptions of the lockdown were particularly important for well-being. This indicates that perhaps the more that adolescents understood the reason for such measures, or perceived there to be some benefits, the more positive they felt in general, said Barry.

The findings underscore the need for parents and educators to give teens information especially in times of crisis, he added.

“In thinking about adolescent development in general, one of the things that we recommend from a developmental psychology perspective is open communication, so for the pandemic, that means honest, accurate information,” Barry said.

He also suggested that parents not only acknowledge the stress and feelings of isolation that may come with something like quarantine but also help teens make the most of the situation. For example, if their kids are missing out on events that were cancelled, parents could help them find other ways to socialize with friends or engage in recreational activities. They should also try to emphasize any potential positive sides of the experience.

“In an unusual situation like lockdowns, mindset matters,” he said.