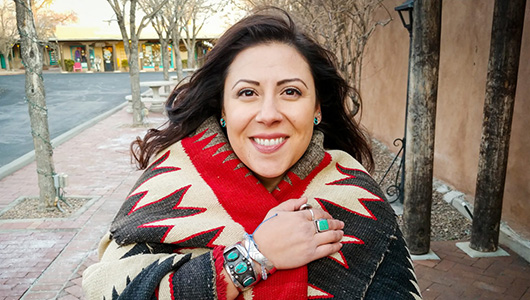 Andrea Mora-Tice is traveling the world as she works on her WSU undergraduate degree in anthropology.

“I could be in the jungles of Sumatra working on a paper,” she says. “If I know I’m going to be in the air or away from home, I can download assignments and reading. It’s all so flexible.”

She has lived in three countries on two continents during the past six years—and visited nearly thirty. Enrolled through WSU Global Campus, she’s been able to continue working toward her bachelor’s degree from wherever in the world she happens to be.

Tice finished her associate degree online in Indonesia during her husband’s first overseas teaching stint and started her anthropology studies through WSU two years later when they moved to Dubai for his second one. She’s planning to complete her degree from their new home in Paraguay, where her husband recently started a new teaching job at The American School of Asunción. She plans to become a history teacher and wants to work abroad at international schools alongside her husband.

She held several jobs—as a florist and a barista, in retail and in sales, and more—to help put her husband through graduate school before starting a family.

Their daughter was a toddler when he found the first job that took them overseas. They moved to Jakarta in 2014—“with an 18-month-old on my hip,” Tice says—so her husband could teach at what’s now called the North Jakarta Intercultural School, a private international school in Kelapa Gading, Indonesia. There, she enrolled her daughter in preschool.

“I always said when she was in school I’d go back to school,” says Tice.

Tice was born in Tacoma and grew up in Gig Harbor. But her family is originally from Albuquerque, and she traveled yearly to New Mexico to visit relatives while she was growing up. Those visits—and her cultural background—influenced her studies.

“I come from a patriarchal culture and am breaking the mold. I wasn’t encouraged to go to college but only to graduate high school,” says Tice, the first female in her immediate family to go to college. “I am mestizo, which means ‘mixture’ in Spanish. I am the product of the Spanish conquistadors and Pueblo Indians of southwest New Mexico. I was really interested in Native American studies, and WSU has a great program. Now, I’m majoring in anthropology with a minor in Native American studies. And all of my travel has really aided me in my learning and our classes and discussions.”

She’s also inspired by the work of Annita Lucchesi (’16 MA Amer. Studies), who created the Murdered and Missing Indigenous Women (MMIW) database. New Mexico has the highest number of cases in the U.S., followed by Washington state.

For the past four years, Tice has been filling in as a substitute teacher at the same schools where her husband has worked. Now, she’s hoping to supplement his income by offering private English lessons in between her own online classes and homework.

“Global Campus has provided a stress-free learning environment that has allowed me to really blossom academically,” she says. “The classes are so interesting, and the professors are great. Some post weekly, but you can always go to the schedule and look ahead and see when things are due. Some assignments take much longer than others, staying on top of the reading is a must.”

Her family’s nomadic lifestyle “goes hand in hand” with her dream of becoming a history teacher. “You can talk about cultures you’ve gotten to experience as well as their origins,” she says. “That’s why I love anthropology: I just love the why and the when.”

Tice particularly enjoys classes that relate to Native American history, and one of her favorite professors is Jack McNassar. “His assignments have helped engage me further with the location I am in the world,” she says. “I now have plans to travel to Palenque (in southern Mexico) and Tikal (in Guatemala) to study with my own eyes the Maya Civilization and the famous Maya Code.”

Her husband’s current teaching contract is for two years. They arrived in Paraguay in August 2019. “Now we are settling into South American life and loving it,” Tice says. “I can relate to the culture because it’s mestizo and similar to the culture I grew up in: Catholic, Hispanic, machismo, with strong familial bonds.”

She married her husband Daniel the same week she turned 21 and he graduated with his bachelor’s degree. He’s a two-time University of Washington Tacoma graduate. But, “I still make him drive our car with a WSU sticker on the back,” says Tice, who’s hoping to continue her online studies with a master’s degree in cultural anthropology. And, “by the time we leave Paraguay, I’m hoping I will have my teaching certificate.”

Meantime, she and Daniel are raising their daughter Penelope—“We call her Pea,” Tice says—as a global citizen, one who does not view the world with an ethnocentric lens but is flexible and open-minded. “Our daughter”—now nearly seven and in first grade—“goes with the flow,” Tice says. “She’s the best little traveler.”

The couple chronicles their adventures at ticesabroad.blogspot.com. They’re not sure where they might live after Paraguay. “We’re really open to all possibilities,” Tice says. “We have our sights set on Africa.”