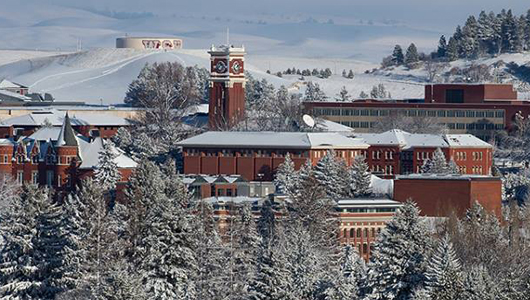 Donald Trump’s presidency will be discussed by experts in U.S. politics during a series of free, public events at Washington State University Wednesday, Feb. 1, and Monday, Feb. 6. Topics will include America’s changing electoral landscape, conspiracy theories, the media and race politics.

“The end of the Obama presidency and election of Donald Trump represent one of the starkest transitions in the history of American politics,” said Cornell Clayton, professor of political science and director of the institute. “We are living in an extraordinary period that we would do well to understand and pay close attention to.”

Paul Pierson will present the keynote Foley Distinguished Lecture, “Trump and the Changing Political Landscape in America,” at 4:30 p.m. Wednesday, Feb. 1, in the CUB auditorium. The John Gross chair and professor of political science at the University of California, Berkeley, Pierson has written award-winning works that include: “Winner-Take-All Politics: How Washington Made the Rich Richer and Turned Its Back on the Middle Class” (2010), “Off-Center: The Republican Revolution and the Erosion of American Democracy” (2005) and “The Transformation of American Politics: Activist Government and the Rise of Conservatism” (2007).

Noon – “Race and Politics,” a conversation between Pierson and Christopher Parker, professor of political science at the University of Washington, in the Foley Speaker’s Room, Bryan Hall 308. Parker is author of “Fighting for Democracy: Black Veterans and the Struggle Against White Supremacy in the Postwar South” (2009) and “Change They Can’t Believe In: The Tea Party and Reactionary Politics in America” (2013).

Noon – “The Role of Conspiratorial Theories in Politics Today,” by Joseph Uscinski, associate professor of political science, University of Miami, in Bryan Hall 308. He is author of “American Conspiracy Theories” (2014) and “The Peoples News” (2014).

4:30 p.m. – “Trump and the Media,” in the CUB auditorium, with: Scott McClellan, White House press secretary under President George W. Bush (2003–06) and author of “What Happened: Inside the Bush White House and Washington’s Culture of Deception” (2009); Matthew Eshbaugh-Soha, professor and chair of political science, University of North Texas, and author of “Breaking through the Noise: Presidential Leadership, Public Opinion and the News Media” (2011) and “The President’s Speeches: Beyond Going Public” (2006); and Uscinski. Moderator will be Porismita Borah, assistant professor in the Edward R. Murrow College of Communication at WSU – a symposium cosponsor.

— By Adrian Aumen, College of Arts and Sciences