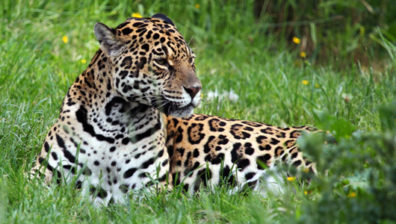 PULLMAN, Wash. – Accelerating deforestation of jaguar habitat, especially in corridors connecting conservation areas, threatens the long-term survival of the iconic predator, according to new research by Dan Thornton, an assistant professor in the Washington State University School of the Environment.

Their study, which appears in the journal Biological Conservation, is the first to examine the impact of deforestation on jaguar habitat on an intercontinental scale and gives conservationists valuable new evidence to direct preservation efforts.

While a previously unknown male jaguar appeared in Arizona’s Huachuca Mountains in December, most of the cats reside in Mexico and Central and South America.

“The decline of forest corridors in Central America is of particular concern because the area is already a natural geographic bottleneck,” Thornton said. “The loss of a single corridor could disconnect the entire northern jaguar population from South America, which could be problematic for maintaining genetic diversity as well as long term species stability.”

Like many large, solitary predators, jaguars require expansive areas of land to survive. The males will claim as much as 50 square miles of territory and will often travel much farther to find new mates.

Without forest corridors to travel through, jaguar populations are at risk of becoming isolated and losing genetic diversity, which has been shown to negatively impact the short and long term survival of wild animals.

Thornton and Olsoy are collaborating with an international group of scientists and several non-governmental organizations to follow up on their study. They are developing new modeling techniques to examine jaguar prey distribution in Honduran and Mexican forest corridors and working on the creation of a prioritized list of areas most in need of additional protections.

“We know that protected status for jaguar habitats and corridors reduces forest loss,” Thornton said. “Our work will help conservationists identify areas most in need of protection. We can then work with communities in these areas to come up with ways to maintain connectivity for jaguars.

“For example, working with local communities to minimize human-wildlife conflict, reduce forest loss or protect private reserves within corridors may be productive approaches,” he said.

Weighing up to 250 pounds, the jaguar is the largest cat in the Americas and is considered sacred by many indigenous communities. Its name is derived from the Native American word yaguar, which means “he who kills with one leap.”

The World Wildlife Fund estimates there are around 15,000 jaguars left in the wild.

“Mexico is at the current northern edge of jaguar range, providing the only possible link to reestablishing a population in the United States,” Thornton said. “Based on our results, bringing more forested sections of jaguar corridors under official protection in Mexico would be highly beneficial.”

— By Will Ferguson, College of Arts & Sciences