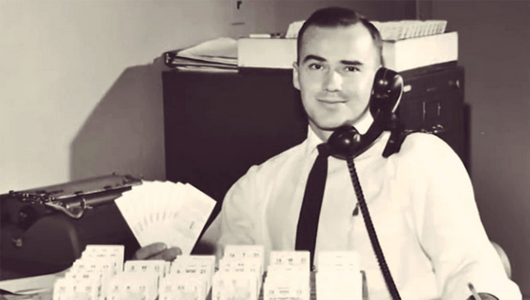 Bob Smawley, “Mr. WSU,” embodied what it meant to be a Cougar for generations of Washington State University students, staff, and alumni, through his selfless service to the University, his caring nature, and his deep knowledge of WSU history, all delivered with a dry sense of humor and true compassion.

For over six decades, Smawley (’52 General Studies) worked under six WSU presidents in several departments, volunteered and led in the Alumni Association, taught many the history of WSU through engaging slideshows, and mentored thousands of students.

“He was the heart of WSU,” says Malia Martine Karlinsky ’92. “Bob had a magical way of making you feel valued and welcome.”

His first job at the college in 1953 as athletic tickets manager and Cougar Club coordinator kicked off more than 60 years of work and volunteer positions at WSU. From ticket manager, Smawley joined the purchasing office, which he eventually led. He then became director of general services and superintendent of the University Police. In the late 1960s and early 1970s, he assisted with protest sit-ins, the arson fire that destroyed Rogers Field stands, and bomb threats.

In 1972, Smawley became the first director of the new Beasley Performing Arts Coliseum, while he still kept the job of general services director. He became interim director of University Relations, spent nine years in that department, and then “retired” in 1982. His retirement was short-lived, as then-President Glenn Terrell asked Smawley to stay on to help the new vice president of University Relations, Stan Schmid, in the transition. Smawley remained as an assistant to Schmid for 11 more years, retiring again in 1993.

“Bob was a walking history book,” says Bill Hyslop ’73. “He knew more about WSU than anyone else who has graced the campus.”

One of Smawley’s favorite jobs was unofficial historian of the University. Beginning in the early 1980s, his famous slideshows educated and entertained everyone from student groups to retiring University presidents and regents. Smawley said he had around 8,000 slides in 20 categories. His presentations, carefully tailored to each group, originally used a slide carousel, but Smawley began digitizing in the mid-2000s with the help of WSU staff members Rich Scott ’71 and Henry Moore.

Beyond all of his other work, Smawley was a mentor and sounding board for many WSU students. Karlinsky says that “Coug daughters” such as herself and Victoria Miles Suzuki ’93 benefited from Smawley’s friendship and encouragement. When she was ASWSU vice president, says Karlinsky, “he would take me to coffee or ice cream and we’d chat. He became like my second dad.”

It kept Smawley connected, too. “He was so energized by the college and the students,” says his daughter Laurie Sahlberg ’77.

Smawley received many awards at the University: Alumni Achievement award, Outstanding Service Award, Staff Member of the Year, and, most of all, the Weldon B. “Hoot” Gibson Distinguished Volunteer Award in 2011, a fitting tribute to his life of service to WSU.

Robert B. Smawley died January 1, 2017, at the Guardian Angel Home in Liberty Lake, Washington. He was 88 years old.