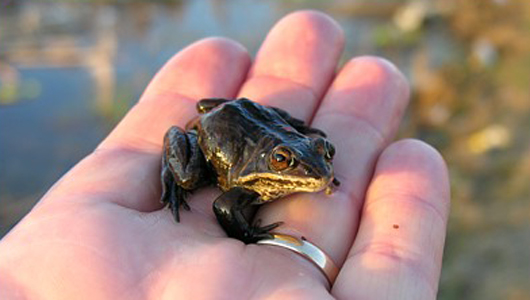 The impact of pollutants from the world’s largest oil sand field on the health of amphibians marks the focus of a team of research biologists from Washington State University and Canada.

The scientists are studying the effects of development in the Athabasca oil sands region of Northern Alberta on the habitat, physiology, behavior and long-term health of wood frogs.

Scientists consider wood frogs a sentinel species, which means the overall health and number of wood frogs in the area can determine how similar organisms will respond to environmental changes.

Wood frogs are one of only three species of amphibians adapted to the cold and marshy oil sands region, located about 1,000 miles due north of Pullman. Known as the “antifreeze frog,” the wood frog can literally freeze during the winter and revive in the spring.

The researchers’ work will inform future restoration efforts, required by the Canadian government after oil extraction in the region is complete.

“By Canadian law, when oil mining leases expire, the land must be returned to a functioning ecosystem through a process called reclamation,” said Erica Crespi, assistant professor in the WSU School of Biological Sciences and one of the lead investigators for the study. “Our job is to determine what impact, if any, the mining sites might have on wood frogs so that we can effectively restore their ecosystem in the future.”

Crespi and Danna Schock, a biologist at Keyano College in Ft. McMurray, Canada, are working with the federal agency Environment and Climate Change Canada along with several other partners to conduct population surveys and collect tissue samples and tadpoles from various ponds in the region for analysis.

The researchers’ preliminary results show survival and disease rates among wood frog tadpoles differed greatly by pond. They also found differences in body size, the amount of the stress hormone corticosterone, and the prevalence of a pathogen called ranavirus among the different populations sampled.

Crespi, Schock and their collaborators are examining several possible explanations for these differences including water quality, food availability, contaminant levels in tissue and water, and habitat connectivity. They are also interested in understanding the long-term effects of these differences on wood frog survival and reproduction.

Crespi received a 2017 WSU International Research Travel Award from the Office of International Programs and the Office of Research to travel to the Athabasca oil sands this summer to continue collecting data for the study and to investigate the impact of recent forest fires on wood frog habitat.

She originally went to the oil sands region in the summer of 2015 with Travis Seaborn, a biology graduate student, and Krysta Dawson, a biology undergraduate at the time who is now studying veterinary medicine at WSU. Together, they collected samples and live specimens for analysis back in Pullman to closely examine the frogs’ health, as well as study important behaviors like response to predators.

“It was probably the coolest experience I had as an undergraduate,” said Dawson, who received a 2015 College of Arts and Sciences summer minigrant to accompany Crespi on the research trip. “I had never worked with a professor in the field before, and I got a lot out of the experience. It helped me to start thinking about the practical applications of what I learned in the classroom.”

For the past two years, Seaborn has worked with a team of undergraduate biology students in Pullman to raise tadpoles taken from wetlands in the oil sands region to investigate factors affecting their growth, mortality rates and behaviors.

“I supervise and manage a group of biology students who take care of the frogs and help analyze various behaviors like activity, food intake and response to predators,” Seaborn said. “So far, we aren’t seeing any differences in terms of behaviors among populations but we are seeing differences in disease prevalence and stress levels.”

The collaborative research could not only help in the restoration of the Canadian oil sands region, but could also help inform conservation efforts in the United States, Crespi said. “Our hope is our work will provide new insights into what types of chemicals and industrial practices cause the most harm, so that we can conserve these species in Canada, the United States and elsewhere.”