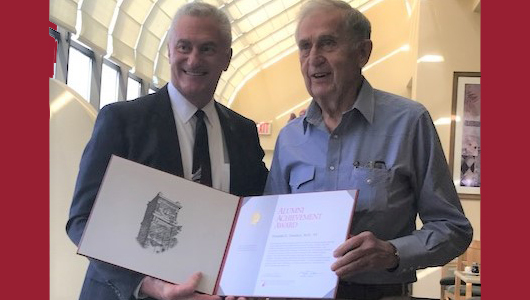 Trunkey’s surgical experience, research and teaching have helped improve medical procedures in hospitals, the military and trauma care facilities worldwide. His personal surgical skills and knowledge have helped save the lives of many, while inspiring a new generation of surgeons who can only hope to follow in his footsteps.

”The critical moment in Don Trunkey’s career was when he published a paper in 1979 on death rates of trauma patients in Orange County, Calif., compared to those in San Francisco County,” said Richard Mullins, MD, Professor, Department of Surgery. “That paper was a bombshell. It was one of the earliest, most persuasive pieces of evidence on the effectiveness of trauma centers.”

That paper’s publication triggered many years of speaking at conferences around the world regarding trauma care.

Trunkey’s long-term dedication to improving surgical and trauma care for members of the military was demonstrated when at 74 years old, he returned to Landsthul, Germany, to provide relief to military surgeons working at U.S. Army hospitals.

In addition to more than 35 years of educational leadership, he also has authored 174 journal articles and 25 books.

The WSUAA Alumni Achievement Award was created in 1970 by the WSUAA Board of Directors to recognize alumni who have given outstanding service to WSU and made contributions to their professions and communities. The award is the highest honor bestowed by the Alumni Association. Of an estimated 250,000 students who have attended WSU, Trunkey is the 533rd Alumni Achievement Award recipient.