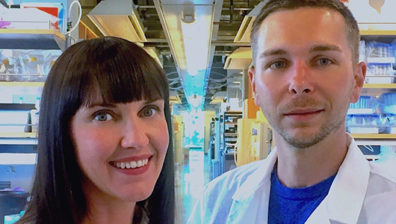 Using a nationally recognized procedure designed to provoke elevated levels of stress, Carrie Cuttler, clinical assistant professor of psychology, Ryan McLaughlin, assistant professor of integrative physiology and neuroscience, and colleagues in the WSU Department of Psychology examined levels of the stress hormone cortisol in both chronic cannabis users and non-users.

“To the best of our knowledge, this is the first study to examine the effects of acute stress on salivary cortisol levels in chronic cannabis users compared to non-users,” Cuttler said. “While we are not at a point where we are comfortable saying whether this muted stress response is a good thing or a bad thing, our work is an important first step in investigating potential therapeutic benefits of cannabis at a time when its use is spreading faster than ever before.”

The WSU researchers found virtually no difference in the salivary cortisol levels of two groups of heavy cannabis users confronted with either a psychologically and physiologically stressful situation or a nonstressful one.

In contrast, cortisol levels among non-users of cannabis who experienced the same simulated stressful situation were found to be much greater than the cortisol level of non-users in the no-stress scenario.

The findings are consistent with a growing body of literature that indicates chronic cannabis use is associated with dulled adrenal and emotional reactivity. The study was published recently in the journal Psychopharmacology.

Research participants self-identified as either a chronic cannabis consumer, with daily or nearly daily use for the previous year, or as a non-user who had consumed cannabis 10 or fewer times in their life and not at all within the previous year. Forty daily cannabis users and 42 non-users participated in the study. All were required to abstain from consuming cannabis on the day of testing.

Upon arrival at the lab, participants provided a saliva sample and were asked to rate their current level of stress. The chronic cannabis users and non-users were randomly assigned to experience either the high-stress or no-stress version of the Maastricht Acute Stress Test. Known by its acronym MAST, it is a commonly used procedure for stress-related research which combines elements of physical, psychosocial and unpredictable types of stress.

The no-stress version was simple: participants placed one hand in lukewarm water for 45-90 seconds and then were asked to count from 1 to 25.

The high-stress version upped the stakes significantly. Participants placed their hand in ice cold water for 45-90 seconds. They were then asked to count backwards from 2043 by 17 and were given negative verbal feedback when they made a mistake. On top of this, subjects were monitored by a web camera and the video feed was displayed on a screen directly in front of the participants so they couldn’t help but see themselves.

Immediately following the stress manipulation, all participants once again provided a saliva sample and were asked to rate their current level of stress. Before departing the testing facility, participants also provided a urine sample so researchers could corroborate self-reported use with bodily THC levels.

Cuttler and her colleagues’ work suggests cannabis might have benefits in conferring resilience to stress, particularly in individuals who already have heightened emotional reactivity to stressful situations.

However, the researchers emphasized the release of cortisol typically serves an adaptive purpose, allowing an individual to mobilize energy stores and respond appropriately to threats in the environment.

“Thus, an inability to mount a proper hormonal response to stress could also have detrimental effects that could potentially be harmful to the individual,” Cuttler said. “Research on cannabis is really just now ramping up because of legalization and our work going forward will play an important role in investigating both the short-term benefits and potential long-term consequences of chronic cannabis use.”

Next steps in the research will include investigating various factors, such as the presence of residual THC, which may be influencing the muted stress response in cannabis users.