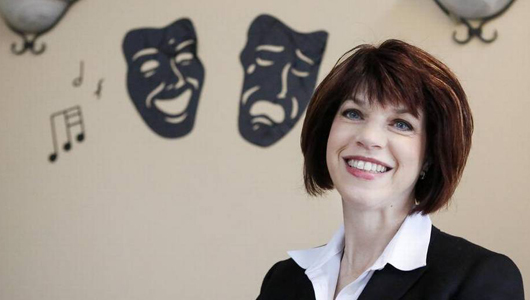 What do the ABC’s have in common with a treble clef? How about a children’s theater production and creative problem-solving? These questions are not riddles, says Becky Cain-Kellogg ’91, owner of the Puyallup Children’s Theater and Music Academy.

Cain-Kellogg opened the theater in Puyallup seven years ago, although she has taught music and theater for nearly 30 years. During that time, Cain-Kellogg also worked as an arts integration specialist, combining music and the arts with subjects such as math and history in schools.

Research says that children who are involved with music and theater early on gain lifelong skills—in part because there are so many aspects involved with learning and performing.

Cain-Kellogg says music helps with discipline and focus while theater encourages children to have a greater sense of self-confidence and increases their problem-solving skills. For example, imagine a lit-up stage and a full audience. Suddenly a prop breaks and someone forgets their lines—what now?!

Such scenarios can teach younger children a valuable lesson, says Cain-Kellogg. Theater helps children learn to be more confident and creative when dealing with minor crises. She says it’s the same with music.

“Music’s in real time,” Cain-Kellogg says. “If you missed your line of the song where you’re supposed to sing or play, it’s done, it’s over, it’s gone. It doesn’t wait for you.”

But that’s not all.

Learning to read sheet music early helps children learn to read. Additionally, music therapy has been shown to help with anger management and attention-deficit/hyperactivity disorder. Some studies even suggest it can help with post-traumatic stress disorder.

Cain-Kellogg describes a student she worked with who couldn’t vocalize his internal anger. She gave the boy a drum and had him express his anger with music. Cain-Kellogg played the beats back to the boy using her own drum. And, according to Cain-Kellogg, it helped. The young boy felt that his anger was being identified and validated.

Music is just “another pathway of communication,” Cain-Kellogg says.

Cain-Kellogg also uses her research and experience to work with special needs children. She says these kids are often excluded from activities in school, but the time the child spends on stage or playing an instrument inspires and empowers the child, the family, and the audience.