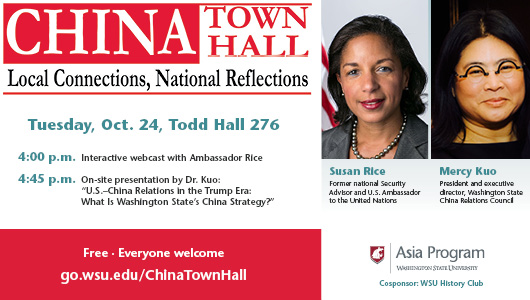 “The annual CHINA Town Hall aims to help people nationwide understand the challenges and opportunities of what has been characterized as the most important bilateral relationship of the twenty-first century,” said Lydia Gerber, clinical associate professor of history and director of the WSU Asia Program, the local event sponsor.

As the top U.S. state exporter to China, Washington has an enormous stake in U.S.-China relations. From wheat to apples and Microsoft to Boeing, businesses and industries statewide are directly affected by America’s political and economic strategy regarding China.

Mercy Kuo, president and executive director of the Seattle-based Washington State China Relations Council, will discuss the importance of Sino-American relations on local businesses and communities as part of this year’s CHINA Town Hall at WSU on Tuesday, Oct. 24.

The free, public event will start with an interactive webcast featuring Susan E. Rice, former national security advisor and U.S. Ambassador to the United Nations, at 4:00 p.m. in Todd Hall 276. She will take questions from audiences at WSU and at more than 80 other participating venues nationwide.

Kuo’s on-site presentation, “U.S.–China Relations in the Trump Era: What Is Washington State’s China Strategy?” will begin at 4:45 p.m.

Understanding global trade linkages across national and local economic interests is fundamental to developing an effective China strategy, Kuo said. “This means, for instance, identifying how the global supply chain affects not only multinational corporations but also small and local businesses in your community.”

Writing in Real Clear World, Kuo said: “China is a ubiquitous player in the economic development of myriad sectors. Its presence is felt across the country—from innovation incubators in Seattle and Silicon Valley, food processing in Iowa, automotive parts manufacturing in Michigan, and oil and gas development in Texas and Oklahoma, to high-tech manufacturing in Massachusetts and real estate investment in New York.”

Local government and business leaders must factor geopolitical threats into their China strategy along with possible disruptions to critical operations, including transportation, seaports, finance, telecommunications and infrastructure, she said.

“Both perspectives will help us identify productive ways of mutual exchange and cooperation in spite of political differences.”